Scott’s Cabin is a short easy walk to visit a great place for a family picnic with fantastic views or if you have an interest in local or Antarctic history.

Accessed from the historic military compound on Godley Head which has a fascinating collection of buildings and bunkers, this small hut on Godley Head has ties to Robert Falcon Scott’s failed Antarctic Terra Nova expedition of 1910-1913.

To Antarctica and back 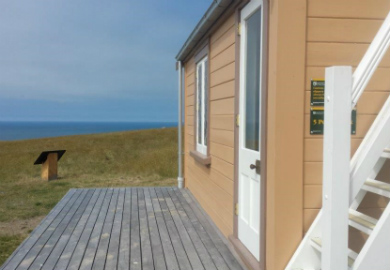 Looking out to sea from the deck of the Cabin.
Image: Michael Smeaton | DOC

This small (3 m by 4 m) prefabricated tongue-and-groove hut was one of four prefabricated huts built by Boulton and Paul Ltd in Norwich, England for Captain Scott’s polar expedition.

This one was constructed for meteorological observations and research at Granite Harbour.

The Cabin was taken to the Antarctic on Captain Scott’s ship the SS Terra Nova in 1911. Unfortunately, the meteorologist, Dr George Simpson, was unable to make the expedition and no-one was available to replace him, so the hut was never used.

In January 1912 Scott’s entire polar party perished on the return journey. They had been beaten to the South Pole by Norwegian, Roald Amundsen.

On return from Antarctica the hut was brought back to Lyttelton in 1912 on the deck of the Terra Nova, still in its wrapping, where it was taken over by Scott’s expedition agent Sir Joseph (J.J) Kinsey. From Lyttelton it was railed to Heathcote and transported in sections by bullock wagon to Sumner.

The Cabin was erected on Clifton Hill in the garden of Kinsey’s summer house “Te Hau Ote Atua.”

Well used throughout the decades

The Cabin became home to the wife of Captain Scott’s right hand-man Dr Edward Wilson, Oriana Wilson, for a year until she received the news of his death in February 1913. At that time the hut was called “Uncle Bill’s Cabin.”

Scott’s wife Kathleen is also believed to have stayed in the Cabin after arriving back in New Zealand in 1913. She learned of Scott’s death on her voyage out here and soon after arrival was commissioned to sculpt his memorial statue, erected in Christchurch in 1917.

Later in 1913 Scott’s Russian dog handler Demetri Gerof and Osman, the lead dog from the expedition, and Scott’s favourite dog, lived there for a year. When he left New Zealand Demetri gave the dog to Sir Kinsey, who later gave it to the Wellington Zoo.

Later Margaret Georgia Davies lived in the house from 1932-1940. She was one of the first WWI nurse-anaesthetists to work on the Western Front.

Valerie and David Crichton became the owners in 1974. In 1978 the Crichton family built a house attached to the cabin and used the cabin as a study for many years.

In February 2011 the most destructive of the Canterbury earthquakes smashed the Crichton’s' house, and part of the cliff face collapsed in a subsequent earthquake that June. The hut survived the “quakes”, but was marooned in a hazard zone, and was faced with the threat of demolition.

Realising the historical importance of the Cabin, the Crichtons vested it with DOC and in 2013 the Cabin was rescued from the red-zoned house on Clifton Hill and trucked to Godley Head.

The hut was lifted on to a timber platform at the site and its windows, stairs and roof were refurbished by DOC. Its new colour palette (Resene 'Chamois', a creamy brown, with chocolate brown trims and white railings) helps it blend with its surrounds.

It now sits just below the Godley Head defense site on a north-facing aspect with similar sweeping sea views to that of Clifton Terrace.

The stairway leads to a roof-top observation platform – originally meant for meteorological observations – its weight supported by two wooden trusses inside the hut.

The hut has a teak floor, originally stood on strong jarrah piles and has Baltic pine cladding. The rimu fireplace surround is from the Kinsey's era, when a fireplace was added to keep the hut warm.

While the inside is not open to the public, you can walk on the viewing platform on the roof or peer in through the windows to see the interior. The outside staircase is narrow and steep, use with caution.There is interpretation on site about the history of the Cabin.

From the car park follow the road and over a stile into the Military Compound and Godley Head Camping area. Continue past the buildings until you reach the signed junction to Taylors Mistake. Follow this track for about 15 min as it drops down towards the round gun pits of the Taylor Battery.

From the Taylor Battery there is a marked track up to Scott’s Cabin. The hut is a 5 min walk up from the battery.

Alternatively, the Godley Head Loop track can be walked from the Taylors Mistake car park.

Camp in the middle of a WWII defence battery site with great ocean views and a range of scenic walks.