Located in Craigieburn Forest Park in the Canterbury region

This is a basic six-bunk hut in the North Canterbury and Arthur's Pass area. A physical remnant of depression mining, Urquharts Hut is historically significant. 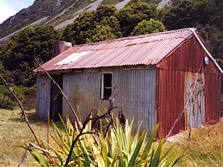 Urquharts Hut is built of beech pole framing, corrugated iron cladding and has an earth floor. Although not originally lined, parts of the hut have some sacking and plywood lining. There is a corrugated iron fireplace at the south end. The hut has six sacking bunks. Running water is obtained from the river and there is a pit toilet near the hut.

The hut is built on a terrace amidst the attractive Wilberforce valley, which is surrounded by high peaks. Access to the hut up the Wilberforce braided river valley is not difficult, but requires numerous river crossings. Care needs to be taken in northwest weather conditions as the river can rise rapidly.

Four unemployed Ashburton men, one of whom was a carpenter, built the hut during the Great Depression in 1933, with Unemployment Board funds under the direction of Rod Urquhart, a former manager of the nearby Mt Algidus Station. All the corrugated iron was taken to the site by packhorse and the beech poles were cut from the nearby bush.

The Ashburton County Council unemployment scheme sent local unemployed men to the Wilberforce to prospect for gold during the depression. Single men received 15 shillings ($1.50) per week and married men 30 shillings. All gold found by the men was to be pooled and shared equally. Income was supplemented by the kea bounty of 2 shillings and six pence (25 cents) per head. Urquharts Hut was built as a base for the prospecting operations and it was intended for use in future years. The best quartz sample assayed a mere 7 pennyweight 13 grains per ton and the whole scheme was abandoned.

Keene H. "Going for Gold, The Search for Riches in the Wilberforce Valley". DOC Christchurch 1995. Out of print but library copies should be available from your local library or on interloan.

With huts built in remote locations, building materials were a big constraint. Often resources available on site were exploited - in this case the surrounding beech forest provided framing.

Urquharts Hut has regional significance as a physical remnant of the history of depression mining.

The hut will continue to be used as overnight accommodation for trampers. It will be maintained to protect its historic fabric and minimise deterioration.