A small but vital refuge for many seabirds, Motunau Island lies close to the coastline of Pegasus Bay north of Christchurch. 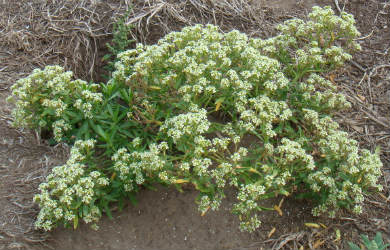 Motunau means ‘island of the nau’. Nau is Captain Cook’s scurvy grass and the species in North Canterbury has the highest ranking of nationally critical. Nau has recently been reintroduced to the island.

The island is just offshore and 1.2 km south of the Motunau river mouth off the Canterbury coast. Motunau Island is distinctively flat topped and only about 300 m long by 100 m wide.

There are three species of geckos and skinks living on the island, while New Zealand fur seals/kekeno use the wave cut rock platforms around the island as haul out areas. Most of the vegetation on the top of the island is made up of introduced grasses with a few patches of mixed shrubland.

There has been a major effort to remove boxthorn plants from the island. Spread by birds from the mainland via seed, this weed blocks the mouths of burrows and its thorny branches trap seabirds in flight.

Motunau Island has been a wildlife refuge since 1935, and a Reserve for the Preservation of Flora and Fauna since 1958. It was one of the sites for the first successful introduction of rabbits to the South Island but these were eventually removed.

The island is 96 km north of Christchurch. From SH1 turn off at Greta Valley and follow Motunau Beach Road to the small settlement of Motunau. The island can be viewed from the beach.

To stop pests from arriving and prevent disturbance to nesting birds, particularly damage to burrows which honeycomb the entire island, access is restricted. Permits are issued for research only. Contact our Mahaanui Office: