Located in the Canterbury region

A 594 m long cave within Cave Stream Scenic Reserve is one of the most outstanding natural features in the Canterbury region.

The reserve is in a high country basin - a low depression bounded by fault-lines along the Craigieburn and Torlesse mountain ranges.

Karst topography is the name given to a limestone landscape. Rain water combines with soil elements (primarily carbon dioxide) to produce a weak acid, which over time trickles into joints and cracks, dissolving the limestone.

The cave has formed with the limestone dissolving over time, diverting Cave Stream from its original surface channel. The abandoned channel is left as a dry valley near the upstream end of the cave.

The form of the limestone bluffs is characteristic of solution weathering of limestone. Depressions in the ground’s surface, or sinkholes, can be seen from the car park. They are typical in a karst region.

A line of three sinkholes can be seen on the river terrace near the car park immediately above the cave. These have let water in to enlarge a joint that runs down the cave’s length, and are responsible for some of the vertical development of the present cave.
The terraces upstream of the cave inlet were formed many thousands of years ago by a glacial-fed river. 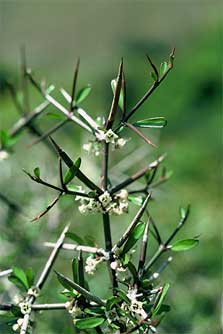 Matagouri can be found at Cave Stream Scenic Reserve

The vegetation of the reserve has been greatly modified. Original plant life would have been low forest of tōtara, broadleaf/pāpāuma, kōwhai and other small leafed shrubs. Burning, over-sowing with introduced grass species and grazing has left introduced grasses as the main vegetation.

The only remaining areas of original vegetation are an assortment of native species in the limestone bluffs and crannies. Large shrubs found here include mountain wineberry/makomako, matagouri, mingimingi/Coprosma propinqua, a few Hebe cupressoides, Helichrysum intermedium, and porcupine shrub/Melicytus alpinus. There are also a few ferns and smaller shrubs including the characteristic limestone fern/Asplenium lyallii, the fern Cystopteris tasmanica and a threatened native forget-me-not/Myosotis colensoi.

There is an abundance of invertebrate fauna in and around the limestone reserve.

In the 'dark zone' of the cave, a rare species of arachnid, the cave harvestman, is found. This feeds on insects and other small cave creatures. It is known to live only in this cave and one other on the West Coast.

On the ridge above the reserve an old Māori backpack was found in a small rock shelter. It is made from flax, with a wooden frame, and has broad straps. Intricately woven flax over the frame could stretch in both directions to accommodate the pack’s contents. Finding this pack confirmed traditional knowledge that Māori used packs, similar to the modern day pack, for carrying loads. The pack is estimated to be 500 years old and can be seen in the Canterbury Museum.

The first European to explore the area was Joseph Pearson, in 1857. Pearson was commissioned to select land for Joseph Hawdon, who took up the original Craigieburn (including Flock Hill) and Grasmere runs. Hawdon was also responsible for the naming of many local features.

The reserve is on SH73, between the Broken River road bridge and Craigieburn Forest Park entrance, about 90 minutes drive from Christchurch.

At least two bus companies service SH73 from Christchurch and Greymouth. Pick-ups and drop-offs must be pre-arranged.

Camping is prohibited within the reserve.

Planning to go through the cave?

Caving parties should have at least two reliable lights per person plus spare batteries, warm polypropylene or wool clothing, and sturdy footwear.

Check the weather forecast before you leave home, and check conditions when you reach the reserve.

If the stream is abnormally high, with the water dis-coloured or foaming, do not attempt to enter. Any snow on the nearby mountains will mean the water will be near freezing (i.e. very cold!) Watch your party for signs of hypothermia.

The cave walk is not suitable for small children.