The original Akaroa Lighthouse started operation on the headland of Akaroa Heads in 1880. One hundred years later, it was moved down to Akaroa Township, after being replaced by an automated light.

The foundations are all that remain of the lighthouse keeper’s family homes, but the original stonework of the supply road down to Haylocks Bay remains along the cliff face, including an original stone culvert at the junction of the road and the small stream. 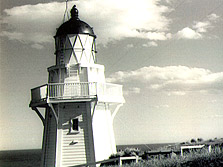 There is an atmosphere of history-past that permeates the air. A visit to Akaroa Heads is still a rewarding experience, even without the lighthouse.

21 Jan 1875
Akaroa Heads was chosen as a suitable site for a lighthouse.

March 1877
The Marine Engineer came to mark out the site; lantern apparatus were ordered from Europe; the lens and mount came from France, and the mechanism from Scotland.

23 April 1878
A road from Haylocks Bay was constructed first to allow building supplies into site. The road, 500 metre long was dynamited out of solid rock for nearly its entire length and took 10 months to complete.

21 Feb 1879
The derrick and platform were built out of kauri.

7 March 1879
Construction began on the lighthouse. A southerly storm completely demolished the framework of the buildings during construction. The next attempted building was given a double skin, and was partially filled with ballast to help survive future southerly blasts.

30 March 1879
Mr William Black, overseer of the construction work, dies of exposure while travelling from the site to Akaroa Town.

1 Jan 1880
The light shines for the first time. The tower is wooden, 28 feet high. The light itself is 270 feet above sea level and is visible 23 miles (37km) distant. The light is a flashing white light of the second order dioptric, flashing every 10 seconds. Construction costs were more than 7000 pounds.

1911
The lighthouse beacon was the last landfall used by Captain Scott when he sailed from Terra Nova to the South Pole.

1935
Power (kerosene generator) was introduced, putting an end to winding the mechanisms every few hours and the need for night watch.

1952
The Principal Keeper's house burns down during the night.

1960
The Assistant Keeper's house was removed

December 1977
An automatic lighthouse is installed by marine division of MOT to replace the manned lighthouse.

4 October 1980
The lighthouse building and equipment was granted to Akaroa Lighthouse Preservation Society, who moved the tower in sections, to Cemetery Point, Akaroa Town (now known as Lighthouse Point).

1984
The Lighthouse Reserve comes under the management of what is now the Department of Conservation, watched over by the New Zealand Historic Places Trust.

Walking through the reserve

From the car park, wander down the 4-wheel-drive vehicle access, entering the reserve through a gate. The road descends down past the foundations of the lighthouse keeper’s house and other buildings, to the site of the old lighthouse.

From here, follow the old supply road, constructed in 1878 -79, which ends at an iron ladder descending to the rock shelf in little Haylocks Bay. An original stone culvert still remains where the road crosses a small stream.