Located in Banks Peninsula area in the Canterbury region

Akaroa is visited by many marine mammals including the world’s smallest dolphin, the Hector’s dolphin. The Akaroa Marine Reserve lies at the mouth of the harbour and is easy to visit as the township offers numerous water-based tourist activities. 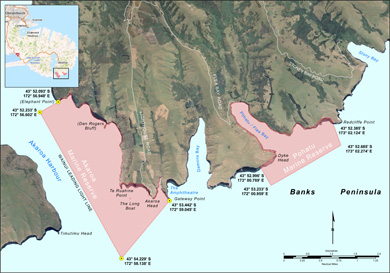 Find things to do and places to stay Akaroa Marine Reserve

Sheer cliffs dotted with caves form the backdrop of the reserve, and huge room-sized boulders lie in the water at their base.

There are also numerous small reefs. Giant beds of bull kelp and red algae surround these landforms, which are encrusted with communities of sponges, anemones, sea stars and sea tulips.

The reef around Gateway Point is of particular scientific interest as it supports an extremely rich and diverse fauna and flora - at least 10% of the benthic species found in this area are 'undescribed'.

The sea floor is mostly gently sloping between 18-30 metres deep, rising steeply to the rocky platform which fringes the shore. The usual array of burrowing animals inhabit the sandy bottom, mostly various tubeworms, molluscs and bivalves.

Akaroa is visited by many marine mammals including the world’s smallest dolphin, the Hector’s dolphin.

Hector's dolphins can usually be seen throughout Akaroa Harbour in the summer months. Common and dusky dolphins are occasional visitors.

Seals haul out along the rock platforms edging the reserve, which are also inhabited by white-flippered penguins. Albatrosses, petrels and many other seabirds visit or live in the harbour.

The township has built a substantial tourism industry around the marine life in its harbour. Akaroa Marine Reserve lies at the mouth of the harbour, comprising about twelve percent of its area.

Akaroa Marine Reserve lies at the mouth of Akaroa harbour. It is 512.15 hectares, about twelve percent of the harbour area.

There are numerous guided boat tours from Akaroa township.

If taking your own boat/kayak, please remember to check the marine weather forecast and tides. Always be prepared for bad weather, as this can change quickly. There are public boat ramps at Duvauchelle, Akaroa and Wainui.

Snorkelers and divers need to be aware of the limitations of people in their party as the reserve is in a relatively isolated part of the harbour, with no cell phone coverage or medical help available nearby.

Scuba divers driving to the reserve need to be aware that the road over the hills from Christchurch reaches nearly 600 metres above sea level, so you need to plan dives and surface times carefully to avoid developing decompression sickness (the bends) during the drive out.

There is land access to the water at Akaroa Head Scenic Reserve which is at the end of Lighthouse Road. However the road is 4WD, parking is restricted and some distance from the access point, which leads to a rock platform via a steep ladder.

Those visiting the reserve by car should be aware that the roads are unsealed and quickly become muddy during heavy rain, which is common.

View a map and GPS coordinates for the boundaries of Akaroa Marine Reserve.

Scuba divers driving to the reserve need to be aware that the road over the hills from Christchurch reaches nearly 600 metres above sea level, so you need to plan dives and surface times carefully to avoid developing decompression sickness (the bends) during the drive out.

There are seals, penguins and dolphins at this reserve that can become distressed or aggressive when approached. Keep the required distance from marine mammals to ensure you have a safe encounter.

You are not permitted to take any animal or natural form from the reserve, including fish, shellfish, shells, seaweed, rocks or driftwood.

Be prepared for changeable weather conditions, as well as rouge waves. Plan you trip and stay safe. Check the coastguard communication guidelines on safe boating.

Only found in New Zealand’s waters, this distinctive grey dolphin with black and white markings and a round dorsal fin is the most easily recognised species of dolphin in New Zealand.