View from the Mueller Hut Route

Located in Aoraki/Mount Cook National Park in the Canterbury region

Bookings are required for Mueller Hut.

The whole tramp is in alpine terrain - know what weather to expect and take the right gear.

The Sealy Tarns Track begins gently until you reach the foot of the Mueller Range. The track zigzags steeply up to Sealy Tarns.

A climb to this spot will reward the walker with spectacular views of the Hooker Valley and the peaks in the area, including Aoraki/Mt Cook on a good day. A tarn is the name given to a small mountain lake or pond.

Assess  your fitness and ability at Sealy Tarns - the track gets harder from there on.

From Sealy Tarns follow the orange markers (every 200 metres) through the tussock. This is not a maintained track but an alpine route.  Parts of the route are quite rocky. It zig-zags through alpine scrub, herb fields and tussocks to a large rock field.

From here the route ascends a loose gravel slope (scree) of about 50 metres, to the skyline ridge. At certain times of the year this becomes a steep snow slope. Once on the ridge relax and enjoy the magnificent view of the Mueller Glacier sweeping down the valley past smaller hanging glaciers and the stunning ice shelf on Mount Sefton.

The route from here turns south towards the hut. Follow the orange markers through the basin until you see Mueller Hut – about 20 minutes along the ridge.

This is a rock scramble along the obvious ridge from Mueller Hut to the top of the rocky outcrop immediately to the south of the hut. A big cairn marks the top. Don’t be tempted to go further along unless you have experience, as it can get dangerous. It is very steep and exposed beyond the top of Mount Ollivier. This was the first peak Sir Edmund Hillary climbed, beginning a climbing career culminating in the first ascent of Everest.

Descend back to the village the same way as you came up. Do not be tempted to go straight down or veer off the route at any stage. Make sure you turn off the ridge down the scree slope at the orange marker. In bad weather it can be quite difficult finding your way.

1 May to mid November: Bookings are not required – first come, first served but you must still register your intentions with the Aoraki/Mount Cook National Park Visitor Centre before you walk.

Booking on behalf of others

Guided groups: To operate a commercial activity in an area managed by DOC, you need to apply for a concession (an official permit), in addition to any bookings you would need to make. Read more about concessions

To make multiple bookings for facilities/services on behalf of customers, you must obtain permission or an agent agreement from DOC. To do this, email: agents@doc.govt.nz

Your safety is your responsibility – be prepared

Find out what to take

There is considerable avalanche danger on the Mueller Hut Route during winter and spring (April to mid November). However, avalanches can occur at any time of the year as snow falls year round in the park. 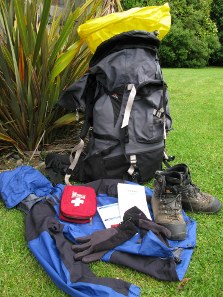 Take the right equipment, clothing and food with you

You can't buy food on the route or at the hut.

Bring food that is lightweight, fast cooking and high in energy value. For example:

The route to Mueller Hut is a great place for viewing alpine flowers and herb fields. With a vertical gain of 1000 metres from valley floor to rocky ridge top, there is a diversity of flora to see.

The tikapu, or Mount Cook lily (Ranunculus lyalli), makes an appearance in late November, followed by a variety of other alpine flowers. Clumps of gentian flowers appear from January onwards, and look out for the yellow Graham’s buttercup (Ranunculus grahamii), which flowers even when snow is still about. The red berries of Pratia macrodon, a small creeping herb found in rocky and stony ground, can be seen on the climb to Sealy Tarns.

Further up, the landscape changes to snow tussock and different grass species, including the curled snow tussock (Chionochloa crassiucula) and other Chionochloa species, and the South island edelweiss (Leucogenes grandiceps) can be glimpsed nestled amongst rocky outcrops.

The nearest thing to a bandit likely to be encountered in the South Island mountains is the kea, New Zealand’s alpine parrot.

Relationships between humans and kea have not always been smooth, partly because of the birds’ tendency to borrow things or analyse them to the point of destruction. People who stow vulnerable objects away and take the time to watch the kea will be treated to some first class clowning, then a flash of bright orange underwing when the antics are over.

By contrast, pīwauwau (rock wrens) are content to hop among rocks and plants in their endless quest for spiders, insects and the minute fruit of alpine plants. Despite being weak fliers they have made it to the 1300- 2500-metre zone, where they stay for the exclusive delight of people who climb that high. Not even the harshest winter forces these little birds down, as they manage to shelter and find foodbetween rocks, beneath alpine shrubs or even under a layer of snow.

Frequently seen flitting over rocky screes and ridges above the 1200-metre contour is the black mountain ringlet (Percnodaimon pluto), New Zealand’s hardiest native butterfly. Its colour is part of a sophisticated solar energy system, vital for living at such an altitude. Survival techniques include laying eggs on the underside of relatively warm stones. Most of the ringlet’s three-year lifecycle is spent as a caterpillar, which could explain the often joyful style exhibited when it finally and briefly, gets airborne.

Beautifully camouflaged grey, green or yellow wingless alpine grasshoppers are so abundant on the route up that when disturbed they can sound like the patter of rain on the grass. Species of large black spiders are common on the boulder and scree slope, but they move so fast you have to be quick to see them.

Mueller Glacier was named by Julius Haast in 1862, after Ferdinand von Mueller. Mueller was a German-born scientist and explorer who came to Australia in 1848. Mueller became a great botanical collector and writer.

Originally built in 1914, the present Mueller Hut is the fifth hut to be built with that name. The first hut was just 300 feet above the Mueller Glacier, but by 1947 it was 500 feet above the glacier and was deteriorating.

A second hut lasted just four months until it was swept away by a wet-snow avalanche. Hut debris was hauled back up from the glacier and used to build temporary quarters erected at the same spot.

The fourth Mueller Hut was built not far below the present site in 1953 and lasted until it was pulled down in 2003.

The current Mueller Hut was opened in July 2003 by Sir Edmund Hillary, and is situated just below Mt Ollivier – the first mountain Sir Edmund climbed.