Aoraki/Mount Cook National Park has a rich cultural and industrial heritage. To Ngāi Tahu, Aoraki represents the most sacred of ancestors.

To Ngāi Tahu, Aoraki represents the most sacred of ancestors, from whom Ngāi Tahu descend and who provide the iwi with its sense of communal identity, solidarity and purpose. The ancestor embodied in the mountain remains the physical manifestation of Aoraki, the link between the supernatural and the natural world.

The tapu associated with Aoraki is significant to the tribal value, and is the source of the power over life and death which the mountain possesses. Aoraki/Mt Cook has Tōpuni status, a public sysmbol of Ngāi Tahu manawhenua and rangatiratanga.

Ngāi Tahu believe that it is not appropriate to climb onto what is effectively the head of an ancestor. Yet European immigrants and visitors alike have come to the area from the earliest times of settlement with the intention of climbing the unclimbed and their stories are the stuff of legends - given the primitive equipment available to these early climbers.

The first attempt to climb Aoraki/Mount Cook was made in 1882 by an Irishman, the Reverend W.S. Green, and two Swiss guides. Although his party climbed to within 200 metres of the top, it was not until 1894 that the summit was reached, by three New Zealanders: Tom Fyfe, Jack Clarke and George Graham.

Today the park is recognised as one of the finest mountaineering areas in the world, for both experienced and novice climbers.

High-level huts are equipped with radios for climbers to use. Information on huts, fees, weather and in winter avalanche conditions, can be obtained from the visitor centre.

The hot baths and 1920s luxuries of the Southern Alps’ most famous hotel were made possible by hydroelectricity. 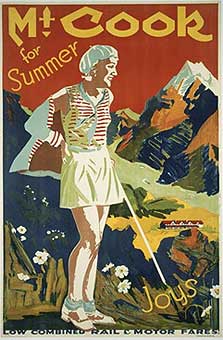 The Hermitage hotel at Aoraki/Mount Cook has long been a poster image for high-end tourism in the Southern Alps. Behind the luxuries lay hydroelectricity. In 1925 a local hydro scheme was built to power the hot dinners, warm rooms and comforts in the remote mountain hotel. Electricity hugely improved the comfort of hotel guests who had previously depended on open fires and wood fuelled stoves. The hydro station was typical of those once common in remote areas of New Zealand before they were linked to the national electricity grid. The national grid reached Mt Cook in 1961.

It was backbreaking and dangerous work to construct the hydro scheme on the hostile terrain high above the valley floor. The half ton Penstock pipes were hauled up the perilous gradient by hand winched steel cable. The rest of the materials were carried on the backs of men up country only suitable for mountain goats. Accidents were a constant threat with falling rocks. Temperatures were so severe the concrete would not set without boiling the water. The site is of interest if you enjoy exploring industrial archaeology. Much evidence remains spread over the rugged terrain. The easiest site to visit is the powerhouse near the road. The Penstock route up Sawyer Stream is very steep and a visit should only be considered by those with climbing experience.

The site is protected in an abandoned state. The old Pelton wheel and generator were relocated to Mt Potts Station and continue to operate.

Stop your car about 50m past Unwin Hut, which is 4km before the Hermitage. The power station site is located about 50m east of the road towards the Sebastopol bluffs.

Read about the Historic Hooker Hut and Sefton Bivouac.