View out to Rangitoto Island from Maungauika/North Head

Located in Maungauika/North Head Historic Reserve in the Auckland region

Explore defences that were placed on the headland to protect Auckland from feared Russian invasions.

A series of loop tracks introduce you to the military history of Maungauika/North Head – the tunnels, guns, searchlights and defences that were placed on the headland to protect Auckland from feared Russian invasions.

The map below shows the location of interpretation signs and what you will see on each loop. 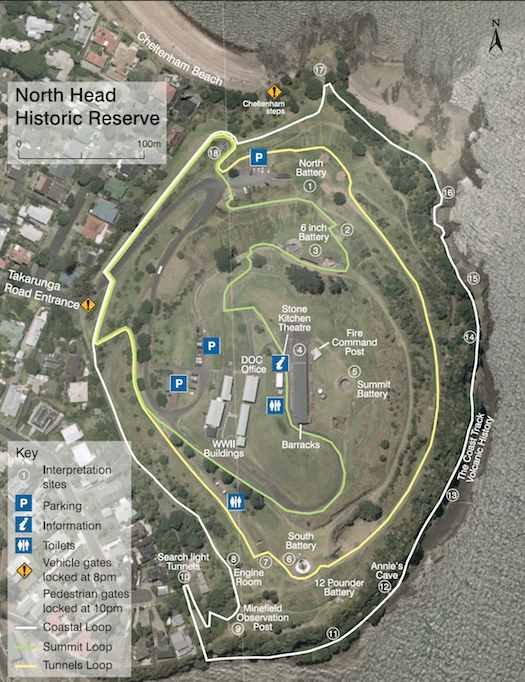 Map notes (numbers below relate to the numbers on the above map):

Maungauika/North Head is located in Devonport at the northern headland of the Waitemata Harbour.

The reserve is approximately 16 km from downtown Auckland by car taking around 30 minutes, depending on traffic conditions.

You can also catch one of the regular ferries from downtown Auckland to Devonport Wharf. The reserve is 2 km from here. Follow King Edward Parade along the waterfront until you reach the end. Straight ahead is the Torpedo Bay Navy Museum. Turn left onto Cheltenham Road, then take the second road on your right - Takarunga Road. The gated entrance to the reserve is at the end of this road.

Learn about the defences that were placed on the headland to protect Auckland from feared Russian invasions.

DOC no longer administers the reserve

The Tūpuna Maunga Authority administers the reserve on behalf of the Collective.