We develop and use new technology to manage kākāpō.

Smart devices save time in the field and allow us to do more for kākāpō than ever before. 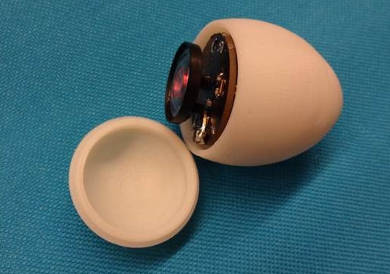 Kākāpō mums start preparing for a new chick when they hear sounds coming from the egg. And prepared mums give better care during the critical first days of a chick’s life.

We routinely remove kākāpō eggs from their nests to incubate them safely. We leave dummy eggs behind and mum carries on as normal, but it can take a while for her to adjust when we return the hatched chick.

So in 2019 we’re trialling 3D-printed smart eggs that can emit life-like sounds. We’re hoping they’ll trigger a preparation response in mum at just the right time.

Eventually we hope to add movement to the smart eggs, as well real-time reporting on nest activity. We could even use the eggs in incubators to detect and report malfunction. The technology could be rolled out globally to help other endangered species.

National Partner Meridian Energy has made the innovation possible through additional funding provided to help drive innovation in kākāpō recovery. We also worked with the International Centre of Birds of Prey.

Drones could become part of the process. We’re investigating their use to transport freshly collected sperm quickly to females ready for insemination.

National Partner Meridian Energy has made the innovation possible through funding provided to help make the most of the breeding season. We also worked with the International Centre of Birds of Prey. 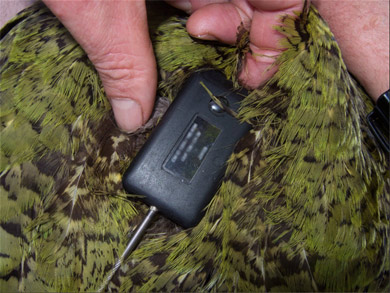 A transmitter is fitted to a kākāpō
Image: DOC

Every kākāpō wears a smart transmitter that sends out a radio signal. The signal describes the bird’s position, whether it’s still alive, and how much battery the transmitter has left. Males and females wear different versions of the transmitter which add behavioural information to the signal.

We put Egg Timer versions of the smart transmitters on female kākāpō. Each transmitter:

We put Check Mate versions of the smart transmitter on male kākāpō. Each transmitter:

If the movement if vigorous enough to suggest mating, the transmitter:

The information helps us manage nests and plan for any required artificial inseminations.

Sirtrack make the transmitters and upgrade the hardware. Wildtech does most of the programming. 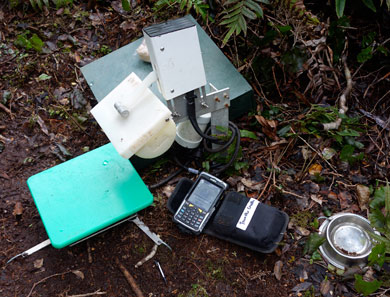 We place data loggers at strategic locations, such as the supplementary feeding stations. Then we use a handheld Bluetooth computer to download information from each data logger as needed.

Data loggers record the movements of any kākāpō within a 10 m radius. In the early days, we often used tracking dogs to find kākāpō – data loggers save us a lot of time.

Special long-range data loggers sit on high points around the islands. In the right conditions, they can pick up signals from transmitters 3 km away. They record the information and send it to us via satellites.

We can record the weight of any kākāpō feeding at a supplementary feeding station by linking a data logger to electronic scales beneath the hopper. The data informs our rationing plans to help each kākāpō reach and maintain an optimum weight for breeding.

Smart hoppers have mechanical arms, plugged into the data logger. The arm locks the lid shut unless a kākāpō wearing the right transmitter comes along. It makes food rationing more reliable.

During a breeding season, all kākāpō nests are closely monitored. Nest kits makes this process as smooth as possible. 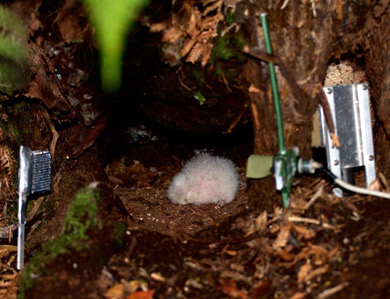 At each nest, we install:

The data logger connects to a device at the tent, helping us detect when the kākāpō mother leaves her nest. That’s the best time to check on the chick.

The data logger also connects to the island’s main hut. Using a laptop at the hut, we take turns to monitor all the nests 24 hours a day. We can see which mums are good at incubating their eggs, which mums are spending too much time away from their chicks and if any other kākāpō are hanging around the nest. Young male kākāpō and seabirds sometimes enter nests and injure the chicks. The proximity sensor detects those male kākāpō and anything entering the nest breaks the infrared beam. 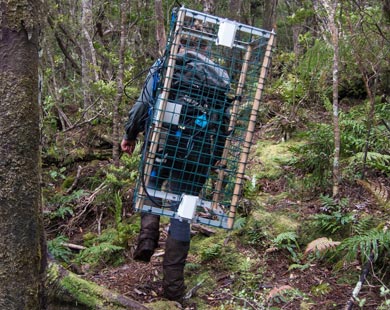 A smart trap on the move
Image: Andrew Digby | DOC

Occasionally, a transmitter will stop working or simply fall off its kākāpō host. To find transmitter-less kākāpō, we use smart traps.

Every kākāpō has a microchip inserted under its skin. It provides a fool-proof way to identify each bird. We can program a smart trap to trigger only when it detects a specific microchip number. When the trap goes off, it sends a message to a nearby ranger who collects the bird as soon as possible.

In 2010, a batch of kākāpō transmitters failed, preventing us from monitoring 21% of the kākāpō population. Without management, kākāpō nests have a very low chance of success, so it’s important to monitor the entire kākāpō population.

Sky Ranger is a kind of data logger that monitors from afar, saving on walking and staff time. It’s used by conservation efforts all over New Zealand.

A datalogger is put in a small plane that then flies a grid pattern over a kākāpō island. The data logger scans all the transmitter channels and records any it detects. It can even record some of the information given out by the transmitters.

We’re trialling GPS trackers to learn more about kākāpō, such as where they prefer to live, what trees they use, what they need to feed their chicks and how often they interact with other kākāpō.