We research new ideas to improve the size and long-term health of the kākāpō population.

We collaborate with local and international experts in research fields such as genetics, artificial insemination and nutrition. 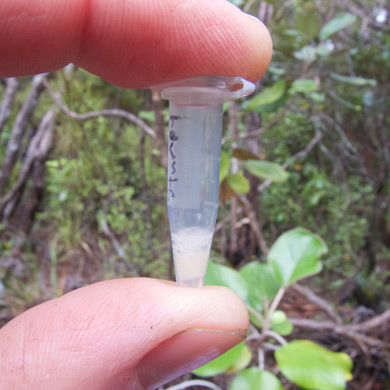 Since 1985, 40% of all kākāpō eggs laid have been infertile, and another 20% of embryos have died early in development. It’s a much higher level of infertility than that observed in other parrot species – usually 10–15%.

We suspect inbreeding is the main cause of high infertility in kākāpō. Most kākāpō from Stewart Island/Rakiura share an unusually high proportion of genes.

We’ve found some male kākāpō to have a high number of abnormal sperm. This could explain the high incidence of infertile eggs and dead embryos.

To reduce infertility, we’ve removed the poorest performing males from the breeding population.

We know that females that mate more than once lay significantly more fertile eggs than those that mate once only.

We don't know how to encourage female kākāpō to mate more frequently. But with artificial insemination we can replicate a second mating, hopefully improving fertility.

We produced the first chicks from artificial insemination in the 2009 breeding season.

Artificial insemination can minimise the loss of genetic diversity. We use DNA fingerprinting to select sperm donors with rare genes and relatively few offspring. We freeze the sperm for later use using cryopreservation.

We can use DNA fingerprinting to determine whether new chicks resulted from artificial insemination or natural mating.

Minisatellite DNA analysis has helped us determine the paternity of chicks produced in recent years. Now, micro-satellite primers give us a far greater understanding of the relationships between birds.

Minisatellite and microsatellite DNA sequences show that the Stewart Island/Rakiura-descended kākāpō population has low genetic diversity. This is supported by inbreeding signs including poor egg fertility and hatchability.

The last Fiordland kākāpō, Richard Henry, and his three offspring have the greatest degree of genetic variation. These birds are extremely valuable to help overcome kākāpō inbreeding issues.

Microsatellite DNA analysis helps us avoid kākāpō inbreeding, maximising the productivity and genetic diversity of the next generation of kākāpō.

Too much food – too many males

Overfeeding is counterproductive. If mothers are given too much supplementary food, they tend to produce more sons than daughters.

Our goal is to achieve more breeding females, so we carefully monitor the weights of individual females and adjust their amount of supplementary food accordingly. We can equalise the number of male and female chicks produced this way.

Breeding in kākāpō is triggered by abundant rimu fruit crops, which occur every three years on average. Often, the rimu crop fails to ripen, and we must hand rear most or all chicks to prevent their starvation. It’s expensive and labour intensive, and the chicks grow more slowly than they would with sufficient rimu fruit.

A successful new supplementary food would allow female kākāpō to successfully raise their chicks even when the rimu fruit crop fails to ripen.

Feeding known quantities of kahikatea fruit and different hand-rearing formulae to chicks, to determine the quantities of specific nutrients chicks obtain from these foods.

The information will help us to formulate a supplementary food that female kākāpō can raise chicks on.

Research to artificially induce breeding in female kākāpō through the application of female reproductive hormones.

Research to determine the carrying capacity of Codfish Island/Whenua Hou for kākāpō, and identify habitat features that influence kākāpō productivity.

Research to determine whether rimu trees can be stimulated to fruit through the artificial application of plant hormones.