We manage kākāpō to ensure they are healthy and ready for breeding.

Adult kākāpō are solitary and reclusive. We handle them at least once a year for a health check and transmitter change. The rest of the time, we leave them to live as naturally as possible. 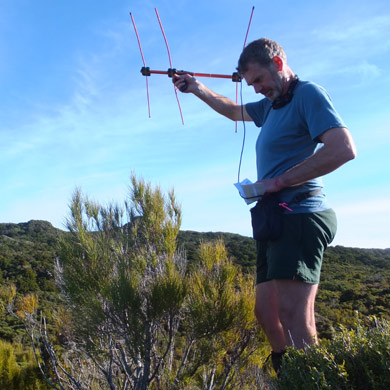 Every kākāpō wears a smart transmitter that emits a signal packed with behavioural data. We scramble over the islands, tracking the signals to collect the data and monitor the birds' locations.

We also collect data from automated tracking stations on the islands, and occasionally during a special flyover.

During breeding seasons, we set up nest kits close to each active nest.

Some nest kits are automated and send data to us via satellite or VHF radio. Others are monitored every night by a rostered nest minder.

About once a year, we give each kākāpō a hands-on health check.

We locate the bird using radio telemetry, then we:

We load the information into a national database. It allows us to track the life history of each kākāpō, and build a clearer picture of the species.

We check young birds at one to five day intervals as they develop in the nest. After they fledge, we check them every two to six weeks for a further five months, then at three-monthly intervals until they are two. Young birds are more likely to have problems while they learn about life in the wild.

Kākāpō live safely on islands free from predators such as cats, dogs, possums, ferrets, stoats and rats. We constantly safeguard the islands from the ongoing threat of predator invasion.

Anchor Island is within swimming distance of the mainland for stoats. We maintain and monitor a network of stoat traps on the island and surrounding islets.

Codfish Island/Whenua Hou and Te Hauturu-o-Toi/Little Barrier Island are not prone to stoat invasion, but were previously home to kiore/Pacific rat. DOC eradicated kiore from Whenua Hou in 1998 and Te Hauturu-o-Toi in 2004. We maintain trap networks on both islands, along with various detection tools to help keep them predator free.

Everything that travels to the island must undergo a quarantine process. Clothing, food, gear and even helicopters are all disinfected and checked by trained staff to ensure there are no mice, insects, seeds or dirt in them.

Most years, we give kākāpō specially formulated food during spring and summer. Supplementary feeding ensures that kākāpō are healthy enough to breed and raise chicks.

Staff and volunteers walk the islands every three or four days, topping up feeding stations and monitoring how much each bird has eaten. Backpacks can weigh up to 20 kg at the start of each day, and the long routes often require travel over steep terrain in demanding conditions. 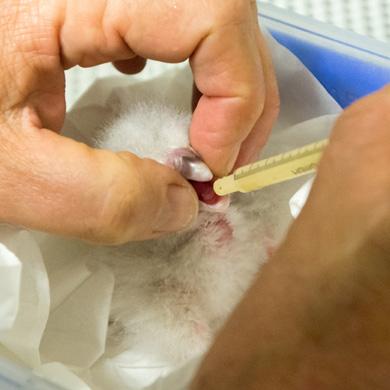 Sometimes, a kākāpō mother has too many chicks to raise successfully herself, or a chick is sick or underweight. In such cases, we remove the chicks and care for them ourselves.

Occasionally, we reduce the number of chicks a mother will have to deal with by removing eggs. We artificially incubate the eggs, mimicking the temperature and humidity of a kākāpō nest. It requires round-the-clock care and specialist skills.

When a chick needs to be hand reared, we keep it with other chicks and return it to the wild when it's four months old. This avoids negative imprinting, where a bird identifies with humans and might not mate with its own species.

Impact on the population

We’ve hand reared 69 kākāpō and returned them to the wild, with a survival rate of 100% one year post release. At the start of 2018, hand-reared birds comprised 41% of the kākāpō population. They would likely have died without rescue. Most are now indistinguishable from wild birds.

In 2016, 16 of our hand-reared female kākāpō nested. Eleven of the females – all first-time mothers – fledged healthy chicks.

Reducing the need for hand rearing

Nest management and supplementary feeding has allowed us to reduce the need for hand rearing.

To make sure chicks are reared as naturally as possible, we:

Mother kākāpō are very accepting of these changes and seem happy to accept new chicks.

One of the main aims of our supplementary feeding trials is to produce a pellet diet that mothers will feed their young when the rimu crop fails.

Get involved with Kākāpō Recovery