This collaborative project was set up to restore and boost numbers of kōaro in the Waitarere Stream at Kaikaitahuna.

Ngati Rangiwewehi are an active iwi with environmental and educational aspirations that support the work of this restoration group. Their land at Kaikatahuna has proven to be the ideal location for this project. 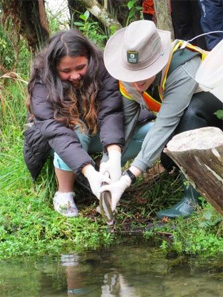 Trout being relocated to below the tout barrier

The kōaro (Galaxias brevipinnis) is a member of the family ‘Galaxiidae’ and is found only in New Zealand and in southern Australia, where it is known as the climbing galaxiid. It is a relatively small fish at around 300 mm long and has an elongate, tubular body. Kōaro don't have scales. It's greyish-brown skin has irregular light-coloured blotches providing a camouflage pattern.

Kōaro occur in the catchments of many of the Rotorua lakes in addition to Lakes Taupo, Rotoaira, Manapouri, Tekapo, Pukaki and Wanaka.

A distinguishing feature of kōaro is its ability to climb up steep surfaces such as waterfalls and dams. Living for 15 years or more, kōaro travel as far as 400 km inland and climb as high as 1300 m.

Kōaro populations in lakes are now much lower than in pre-European times due to progressive habitat destruction and increased predation. Landlocked kōaro were once the dominant fish species in most of the large, inland lakes of the central North Island and up until about 1900 kōaro supported important Māori fisheries.

The objectives of the project are to prevent the further decline of kōaro through the removal of predators and restoration of habitat at Kaikaitahuna and utilise the trout barrier as a method of kōaro restoration.

Kōaro are spectacular climbers and use their flattened fins to scramble up waterways in order to reach shady forest streams. The kōaro restoration project is based upon this ability to climb.

A concrete weir which kōaro can easily scale has been built at Hamaurana Springs. While the kōaro find a haven at the top of the weir, trout are prevented from encroaching by a metal gate which prevents their jumping. Upstream, the trout population has been relocated to provide a safe habitat for kōaro to breed.

The steam is actively monitored to see if the weir is an effective way to increase kōaro numbers.

An aditional objective of the project is to support the educational aspirations of Ngati Rangiwewehi. Project leader Rikihana explains “We have developed an environmental education programme for our people based around the awa looking at a number of different aspects: water quality, invertebrates and kōaro. Not only has the project inspired our people to learn more about their awa, it is providing valuable data on the health of the springs.

“The most inspiring thing has been seeing the energy and buzz in the eyes of the youth from our iwi on holding kōaro during monitoring. You can see those children have the buzz for what we have here. We are creating young conservationists in our iwi.”