Learn about the sites that served as New Zealand defences in the Hauraki Gulf, now cared for by the Department of Conservation.

North Head's commanding views over the Hauraki Gulf have made it an important lookout and defence site for centuries, first for the early Maori inhabitants and later for European settlers. Its complex of tunnels, gun emplacements, searchlights and other fortifications, date back to the late 1880s and early 1900s when North Head was a major military fort - defending Auckland from enemies who never came. It is the most visited Department of Conservation reserve in the country. 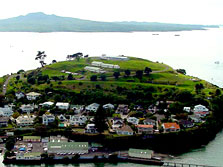 North Head with Rangitoto in the
background

North Head is one of the oldest of 50 volcanic cones formed in the Auckland area in a series of great explosions 50,000 years ago. Called Maungauika, Maori were the first to use it for defence purposes - the Ngati Paoa tribe settled there until they were besieged by the Nga Puhi in the late 1700s. It seems to have been abandoned until Chief Heteraka Takapuna moved to Torpedo Bay in the 1830s.

Soon after, a pilot station was set up on North Head to guide ships into the Waitemata Harbour and the newly-established European settlement in Auckland. And when fears of a Russian invasion began to sweep New Zealand in the late 1800s North Head became one of a number of defence forts set up to protect Auckland.  Another was Fort Takapuna (see related links).

There were in fact three forts on North Head: the North Battery (to defend the Rangitoto Channel), the South Battery (to protect the inner harbour) and Fort Cautley on the summit. Each fort had heavy guns, observation posts and high encircling walls. The centrepiece was an eight-inch disappearing gun (it recoiled underground after firing), the very latest in military technology in its day.

The Russians never came, and during World War I the North Head military complex was again ready for action, this time against the Germans. Soldiers lived on site in barracks and tents. However, as with the Russian scare, the enemy never arrived. Once again the guns remained unused except for practice.

During World War II North Head again geared up to defend Auckland, this time from an expected Japanese attack. Now Auckland's coastal defences had been extended to cover a much wider area, with some of the big guns moved to Whangaparāoa Peninsula, but North Head remained the Regimental Headquarters for the whole Hauraki Gulf defence system. Once again, there was no attack and the impressive guns were used only for training and ceremony.

Motutapu Island was an important part of this extended defence network in World War II. A gun battery and observation post, searchlight installations, underground ammunition stores, roads and barracks were built. Today the army barracks at Administration Bay have been converted into an outdoor education camp which hosts more than 8000 schoolchildren a year, and a major community project is underway restoring Motutapu's cultural and natural landscape.  Neighbouring Rangitoto Island also played a key rol, with observation points, small gun emplacements and a military complex.

Archaeological and historic sites are being interpreted, telling the stories of centuries of human occupation, from fortified pa to World War II gun emplacements.

Motuihe Island also has wartime associations. During World War I it was used as a prisoner of war camp, its most notable prisoner the German Captain Felix von Luckner, who escaped after only three weeks in captivity. He was later captured and returned to Motuihe Island until the end of the war.

Map of Coast Defence sites you can visit (JPG, 132K)