Familiar faces are returning for the new season of Royal Cam, with a big breeding year underway for the toroa/northern royal albatross colony on Otago’s windswept Pukekura/Taiaroa Head. 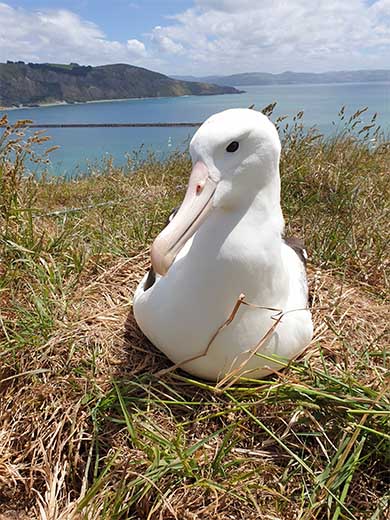 More than 120 albatrosses, a taonga species, have returned to the colony for the coming season, with more than 40 eggs laid. The eggs will start hatching in mid-January before fledging more than seven months later in September or October.

DOC intensively manages the birds from nesting until when the chicks fledge (leave the nest).

DOC Ranger Sharyn Broni says it’s the second highest number of eggs recorded at the colony and is the sign of a good season ahead.

Royal Albatross Centre Operations Manager Hoani Langsbury says having the globe-travelling northern royal albatross returned to Pukekura for another season, and the high number of nests and eggs, brings positivity to the end of a challenging and unique 2020.

Meanwhile, in a Royal Cam first, fan favourites LGL (female) and LGK (male) will once again be livestreamed to screens around the world.

The couple are the parents of Karere, the star of the 2018/19 season. This is the first time a pair has been seen mating and the egg laid in view of the cam.

LGL and LGK have set up a nest and laid an egg, which has been candled to check it is fertile. It is their third breeding attempt at the Pukekura/Taiaroa Head colony after they first got together in 2017.

The camera was moved closer to the new nest on Sunday. The livestream is run with the support of New York university Cornell Lab of Ornithology, which partnered with the programme in 2019 and significantly boosted its reach internationally.

Sharyn Broni says LGL and LGK were chosen for the livestream because they nested close to where last season’s chick Atawhai was raised, so regular viewers had already become excited to watch them set up their nest and lay their egg.

Cornell University are hosting an online Q&A with Sharyn Broni about the effort to conserve the albatross on Tuesday at 10 am.

More info and how to RSVP.

Toroa/northern royal albatross are one of the largest seabirds in the world, with wingspans up to 3 m. They are a vulnerable species that has been affected by changes to habitat and climate and by some fishing practices.

They also reproduce slowly, with breeding pairs typically raising a chick once every two years.

DOC manages the albatross colony with the support of the Otago Peninsula Trust, Te Poari a Pukekura (Pukekura Co-management Trust, which governs Pukekura/Taiaroa Head) and Dunedin City Council. It has grown from one breeding pair in 1937 to more than 60 pairs in 2020.

Royal Cam joined Cornell Lab’s global network of live bird cameras last year, upgrading DOC’s existing web so the stream now features new capabilities like the ability to pan and night vision. Night vision also gives our international streamers the ability to tune in at any time of the day, when previously they would miss out on much of the albatross action due to different time zones.

Pukekura/Taiaroa Head is a significant site for its cultural and historic values, and for the other taonga species that live there. It is home to about 10,000 birds including red-billed gulls, little penguins, spotted shags, Otago shags, titi, and royal spoonbill.