For the first time in more than 100 years, takahē will roam freely in Kahurangi National Park in an historic attempt to create a new wild population outside of Fiordland. 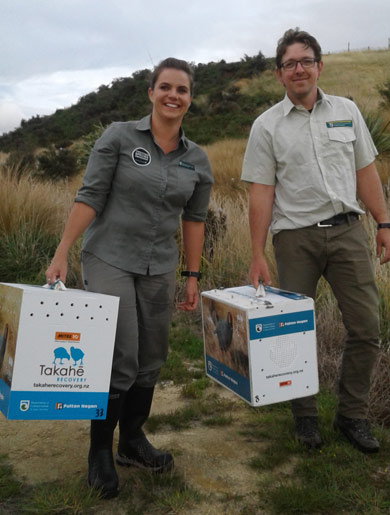 In a significant step for DOC’s Takahē Recovery Programme, 18 birds will today be released into Gouland Downs off the Heaphy Track.

DOC Takahē Operations Manager Deidre Vercoe says after considerable preparation – including a postponement of the release last year - it is fantastic to return takahē to a part of their ancestral home.

“This translocation marks the next step in takahē recovery. Currently, these taonga birds only have one large wild site to call home – the remote Murchison Mountains of Fiordland. Trying to establish another large wild population is a bold move and it might not work, but we must push the boundaries if we are to learn and make progress.

“If the birds released today successfully establish in Kahurangi, we are a significant step closer to achieving our goal of seeing takahē in growing numbers in large areas of their former natural range.”

“The past couple of years have been huge for takahē with the population reaching a milestone 300 birds and moving from Nationally Critical to Nationally Vulnerable,” says Eugenie Sage.

“With the population increasing a rapid 10% per year, secure island and mainland sanctuary sites that are currently home to most takahē are filling up fast. We’re at the stage where we have a blueprint for breeding birds successfully – but without suitable habitat with low predator numbers their future is still not secure.”

Kahurangi is the best bet for a new wild population to survive and thrive with its large areas of intact tussock grassland and extensive predator control including DOC Battle for our Birds operations and a large trapping network supported by Air New Zealand.

The programme estimates it could eventually accommodate up to 30 breeding pairs.

The Kahurangi takahē release is only made possible through the ongoing support of Takahē Recovery Programme partners Ngāi Tahu and Fulton Hogan, Deidre Vercoe says.

Sandra Cook, Ōraka-Aparima Rūnaka Kaiwhakahaere, says, “Ngāi Tahu, and in particular Ōraka-Aparima Rūnaka, have been closely involved in the Takahē Recovery Programme for more than 20 years. It has long been our ambition to see more populations of takahē in the wild and so this is a huge day for our people and for our taonga species.”

Fulton Hogan CEO New Zealand Contracting Graeme Johnson says it is a privilege to be involved in this historic release.

“As proud New Zealanders, we are passionate about our natural environment and the role it plays in our culture and communities. We look forward to the success of this iconic species.”

Safely moving 18 large, flightless birds from the Burwood Takahē Centre near Te Anau to their new home has been a team effort, with Air New Zealand operating a special direct charter service to fly the takahē from Queenstown to Nelson.

Air New Zealand Head of Sustainability Lisa Daniell says Air New Zealand has carried more than 2500 native creatures to safer habitats in the past five years – but this is the first time it has operated a flight specifically for the precious passengers.

Three representative birds were formally welcomed into their new home with a short pōwhiri at the Onetahua marae.

The birds will be closely monitored over the coming months and years to track survival, health, habitat use and breeding success.

A second release of 12 takahē is planned in the following couple of months, allowing the birds to complete their moult, and the DOC takahē team to assess how the first birds are faring in the new  home. This will bring the founding population up to 30 birds. If successful, further takahe will be released near the end of this year (2018).

Fossil records show takahē were once present in the Kahurangi area.