West Coast whio have received a substantial boost to their population this year.

This week’s release of 19 captively-reared whio makes a total of 31 birds released this season that were bred from whio sourced from the Central Southern Alps site in the backcountry behind Hokitika. Whio are good breeders in a safe environment, these 31 birds originate from four captive pairs. 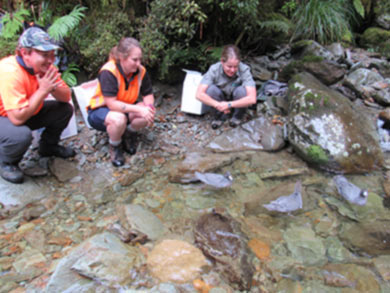 22 of these birds have gone back to the to the Central Southern Alps Whio Security Site, and the other nine to two sites in the Paparoa Ranges north of Greymouth.

Captive rearing has proven to be an effective method of increasing whio populations quickly. Using this method, whio pairs that have been raised in captivity after being taken as eggs from sites in the wild are held for breeding.

The eggs they lay are hatched and reared in captivity before the young adult birds are returned to the wild. In the North Island, captive rearing has been used to repopulate Mt Taranaki, where whio had gone extinct locally.

Work to increase the numbers of whio on rivers behind Hokitika started almost 15 years ago with a trapping programme established on the Styx River. At this time, whio numbers were dwindling with only two or three pairs.

This was followed by Whio Operation Nest Egg, in which whio nests are located by trained species dogs and the eggs removed for safe hatching and rearing at the Isaac Conservation and Wildlife Trust in Christchurch.

The support of Genesis Energy has enabled DOC to expand the Central Southern Alps Site to now include the Arahura, Taipo, and Kawhaka Rivers and it’s aimed to grow its population to 50 whio pairs.

Genesis Environmental Coordinator, Cam Speedy, who works alongside the DOC whio technical team says it is incredibly gratifying to seeing so many whio being released.

“It’s these sorts of numbers that make the hard work done by so many people all worthwhile. Seeing the Genesis – DOC Whio Forever partnership support communities working to restore the whio in the wild is immensely satisfying.”

“Hopefully the birds released this season will find mates, breed, and continue to grow the population of these endangered native birds. Extensive trapping networks within the security site are necessary to protect the birds, especially nesting females from predators.”