One of New Zealand’s rarest birds, the New Zealand fairy tern/tara-iti, has been boosted by a chick successfully hatching at Mangawhai, North of Auckland in late November.

With a total population of approximately 40 birds, the New Zealand fairy tern is critically endangered, and has teetered on the brink of extinction since the 1970s.

DOC Mangawhai Fairy Tern Ranger Keven Drew said, "Although it is early days for the chick and the risks are high, we are hopeful he or she will continue to do well and fledge later in summer."

Fairy terns nest on shell and sand banks just above high tide. This makes them vulnerable to rats, stoats and other predators, disturbance by people, 4WD vehicles and dogs. They are also at risk from stormy weather and very high tides. 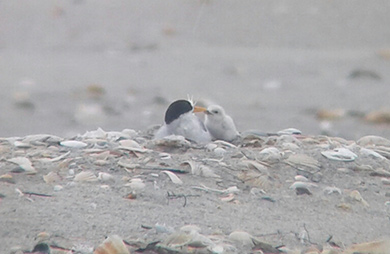 "The birds cannot be transported to predator-free offshore islands because they are very particular about where they nest, and the chicks are not raised in captivity as they have to be looked after by their parents while they learn how to fish successfully" said Keven.

A dedicated team of four fairy tern DOC rangers have been busy since September trapping predators near nesting sites and preventing nesting birds from being disturbed by humans.

Once widespread around the North Island and on the eastern South Island, the New Zealand fairy tern now breeds at only four nesting sites; Papakanui Spit; Pakiri Beach; Waipu and Mangawhai sandspits. Only eleven breeding pairs of birds remain.

Laws to protect fairy terns and other shorebirds: