DOC and Goodnature are working together to install the latest traps to better protect Haast tokoeka kiwi.

The Department of Conservation is working with conservation techology company Goodnature to install the latest traps at a remote South Westland site to better protect one of our rarest kiwi.

DOC rangers have worked alongside Goodnature staff to set up 1200 self–resetting traps across the 11,400 hectare Haast Kiwi Sanctuary to defend Haast tokoeka kiwi from stoats as part of DOC’s Battle for our Birds programme. 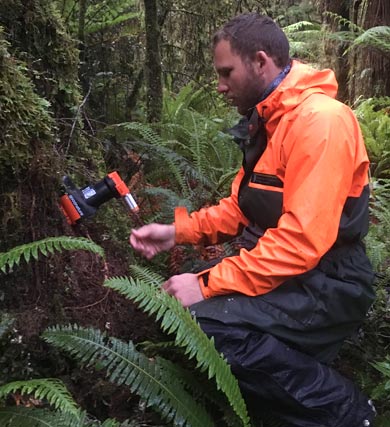 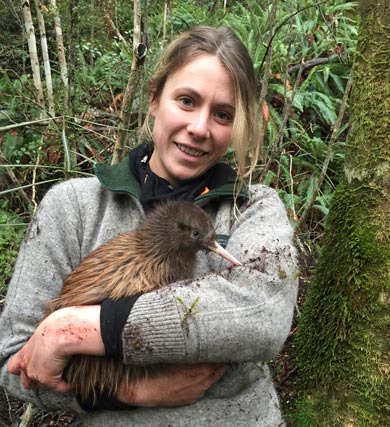 The Goodnature trap is the world’s first predator trap that resets itself up to 24 times before it needs to be reloaded manually. The team took about a week to lay the lightweight traps, which are quicker to install than the traditional boxed traps.

DOC Operations Manager for South Westland, Wayne Costello, says the upgraded trap network will take stoat control to a new level and enable a shift to a less intensive approach to managing kiwi in the sanctuary.

“With our improved trap network and more effective Goodnature traps, we aim to suppress stoats year–round in the Haast Kiwi Sanctuary.”

“Previously we’ve collected eggs and reared chicks offsite until they were big enough to cope with stoats but now we will leave them to be raised naturally in the sanctuary.”

The enhanced trapping will allow DOC to reprioritise its intensive Operation Nest EggTM programme to kiwi outside the sanctuary in the surrounding area and spread recovery efforts more widely, says Wayne Costello.

Goodnature founder and Director Stu Barr says they are excited to see their trap being used to help grow the Haast tokoeka population.

“Over the last decade we’ve developed the trap technology to bring back our endangered native birds from the brink and see them recover.”

“DOC trials have shown that the A24 trap is effective in protecting kiwi chicks from stoats and we’re really excited it will be used to help save this rare kiwi species,” says Stu Barr.

DOC is monitoring the survival of kiwi chicks in the sanctuary to measure the effectiveness of managing Haast tokoeka in the wild using a combination of trapping and aerial treatment of biodegradable 1080 when pest plagues occur.

The Haast Kiwi Sanctuary trap network also includes 910 standard DOC 200 boxed traps, each with two single–set stoat traps.  The overall cost of the trap upgrade is $270,000, which includes installation and the first year of servicing.

Stoats are the prime threat to kiwi chicks, which are vulnerable until they get big enough to fend them off at about one year old.  Without conservation management fewer than 10% of Haast tokoeka chicks survive to adulthood, which is not enough to sustain the population.

The trap upgrade follows aerial 1080 treatment across the sanctuary and wider area (over 31,000 hectares) last August to knock down rising numbers of rats and stoats caused by forest seeding.  Rodent monitoring results in February this year showed that rats were still at very low levels (tracking rate of 1.6%) more than five months after the pest control operation.

The Haast Kiwi Sanctuary, near Haast township, covers at least 85% of the area where Haast tokoeka are known to live.  With an estimated population of about 400, Haast tokokea is our most threatened kiwi sub-species (ranked ‘nationally critical’).

Our vision is a natural environment in which native species survive, thrive and flourish, free from the threat and destruction of introduced pests. Goodnature is constantly working to develop products that make it easy for everyone to create sanctuaries in their backyard, however big. We are committed to providing pragmatic solutions to one of our most serious environmental problems - biodiversity decline.

This is through the design and manufacture of automatic traps that humanely kill pest animals and then reset themselves. The traps are humane and toxin free and have been designed to save users time and effort.