A new wasp bait has been used to successfully control wasps around the picnic areas at Woolshed Creek and Sharplin Falls.

The operation was conducted by staff from the Department of Conservation and members of the Mt Somers Walkways Society, and used Vespex bait to significantly reduced wasp activity in the area. 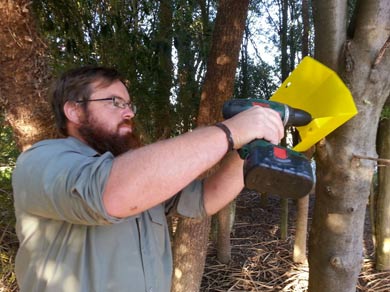 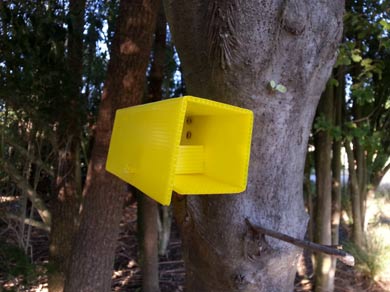 Stations were removed after a week, with great results
IMAGE: Murray Thomas | DOC

Wasps have become a major problem over summer as their nests develop.  Huge numbers of wasps are frequently seen in Beech forests feeding on honeydew. Wasps are one of the most damaging insect pests in New Zealand, threatening our native birds and insects and posing a huge nuisance and health risk to people.

In the past it has been necessary to find and kill each nest individually. The new method means Vespex is laid in bait stations and the wasps carry it back to their nests. The specially designed bait uses a protein lure which only attracts wasps so other species such as bees are not harmed.  It can only be used when the wasps have established their nests and are feeding for protein.  This normally occurs in early February each year.

The operation on the Mt Somers Track involved installing bait stations which are small yellow tubes fixed to trees about one and a half metres off the ground. 11 stations were used at Sharplin Falls and 22 at Woolshed Creek. The stations were baited once and then removed a week later.

DOC's Visitor Assets Ranger in Geraldine, Damien Bromwich said he was amazed with the results.  "The trees were crawling with wasps when we put the bait stations out and when we went back to remove them all we saw were honeybees feeding on the honeydew."

Vespex is produced and licensed by Merchento which is a Nelson based company.  People can apply to the company to become approved users.  Barry Austin from the Walkways Society will shortly be using the insecticide on private land adjoining the Awa Awa Rata Reserve near Mt Hutt.

Wasps are widespread and they will establish new nests each spring. The average wasp nest produces up to 2000 Queens per season.

"Given the success this year, we will be planning a much larger operation next summer," said Murray Thomas, DOC's Senior Ranger, in Geraldine.  In partnership with the Mt Somers Walkways Society "we will target a much larger area of the tracks and other places people use".