Ipipiri/Eastern Bay of Islands have been pest-free since 2009. Our pest response was tested recently when several rats were detected during routine monitoring on the islands.

DOC Senior Ranger Adrian Walker said, "The rats were picked up quickly and we were able to respond quickly. We have never had to deal with so many rats at once, and this shows our ongoing monitoring of these islands is effective and we have world class response systems in place." 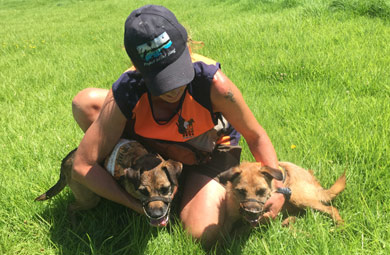 Conservation dogs helping to track down the rats
Image: DOC

Of the six rats detected, four have been trapped; two on Poroporo Island, one on Cable Bay Urupukapuka, and one on Round Island. Single rats remain on both Okahu and Urupukapuka Islands. All rats caught have been Norway rats, and two were young females which don't appear to have bred. Once caught, DNA samples are sent away for further analysis.

Identification methods include tracking tunnels (an ink pad in a tunnel that shows footprints), wax tags (a wax block that rats chew on) and rodent detection dogs. Control methods include trapping using DOC 200 traps and poisoning. The DOC led response is being executed by trained members of Nga Hapu o Te Rawhiti and DOC staff. The Department, Te Rawhiti hapu and The Guardians of the Bay of Islands work in partnership on Project Island Song, to restore the islands and keep them pest-free.

The largest rat found in New Zealand, Norway rats can kill nesting adult seabirds and prey on animals that live, roost or nest close to the ground. These rats are also very good swimmers.

"Even one rat can do a lot of damage, eating birds, eggs, reptiles and insects. Locating the rats is challenging, as Norway rats tend to remain in hiding during the day in underground burrows. This is where the rodent detection dogs and their skilled handlers are key. We couldn't keep these islands pest free without conservation dogs" said Walker.

"This is the first time a rat has been found on Okahu Island since eradiation in 2009, and we're still trying to work out how it got there. It may have swum or hitched a ride on a boat. It's reassuring to know we can respond well, but it's even better if we can keep the pests off the islands in the first place."

"Remember to STOP, CHECK and GO before you head to the islands - check your boats and gear for rats, mice, ants and skinks. Keeping the Bay's islands pest-free is everyone's responsibility and we need everyone to play their part."

The islands of Ipipiri/eastern Bay of Islands are coming alive. Project Island Song is leading the restoration of this archipelago, returning native plant and animal species for all to enjoy.