After a lengthy battle, DOC believes it has eradicated the invasive environmental weed tradescantia from Takapourewa/Stephens Island in Cook Strait.

“Ridding the island of this ground-smothering weed means our native wildlife can now thrive and it gives our native plants a chance to regenerate,” says DOC Senior Ranger Phil Clerke.

Tradescantia, or ‘wandering willie’, is one of the ‘Dirty Dozen’ weeds targeted by the Department’s War on Weeds. 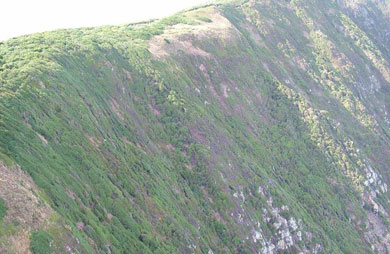 Takapourewa/Stephens Island, which is administered by DOC in partnership with Ngāti Kōata, is a nationally important wildlife sanctuary located in Cook Strait. It is renowned for its population of tuatara, large numbers of burrowing seabirds and little blue penguins. It is also home to the rare Cook Strait striped gecko, an endemic frog, rare insects and plants.

Tradescantia was so heavily infested on parts of the island that it greatly impaired access to burrows of tuatara and seabirds like fairy prions, and prevented native seedling trees from establishing. 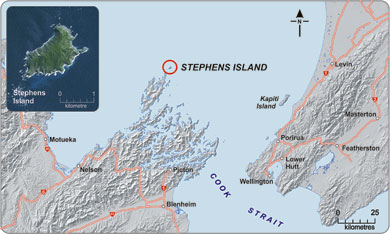 Phil Clerke says control started in 1990 but it wasn’t until 2003 that a dedicated eradication programme was initiated with the help of volunteers, and yearly visits were made to remove the weed.

“Recent visits found no further trace of the weed so we are now more confident than ever that this weed has been cleared,” he says.

Tradescantia has been controlled through a mix of spraying difficult to reach areas and pulling weeds out by hand, followed up by regular monitoring.

“It was a tough and unforgiving job,” says Phil Clerke. “The terrain was unstable and steep with thick coastal scrubby vegetation.”

Ngāti Kōata take their Kaitiaki obligations most seriously, says the iwi’s Projects Manager Matt Hippolite. “Along with the significant native reforestation efforts over the past 10 years, the eradication of pest species like tradescantia is significant to the success of these restoration efforts. We look forward to more successful partnership outcomes with the Department of Conservation to maintain and enhance the mauri and wairua in areas of common interest."

Even though DOC staff are 99% confident that tradescantia has been removed, they will have to check annually for at least five years before eradication can be declared. This is because fragments can remain buried for years and then start regrowing when the soil is disturbed and the fragments are exposed to light.

This shows the huge amount of effort required to eradicate an environmental weed and that preventing weeds from spreading in the first place is the best option.

Tradescantia is one of the “Dirty Dozen” weeds targeted by DOC’s War on Weeds. Also known as wandering willie or wandering jew, it was introduced to New Zealand from South America as an ornamental plant, but the ground-smothering plant is now widespread nationally and prevents seedlings from emerging.