A 8.9 m humpback whale first spotted off the Kaikoura Coast in March 2016 has died and washed ashore on a beach near Ashburton.

DOC staff were informed about the whale on Friday 8 July. They have taken samples and measurements over the weekend.

This juvenile whale has a distinctive tail with the tail flukes on either side missing. It is possible that a net entanglement at a young age caused this injury, however we can’t be certain.

DOC ranger Steve Harraway said he was disappointed to see the body of the dead whale had been tampered with since washing ashore. He encouraged the public to take care when viewing the whale carcass and ensure children and dogs stay away from it to avoid contamination.

“The whale is decomposing and people should avoid touching the carcass as this could cause infection or sickness,” says Steve Harraway.

“It is an offence to take all or part of a marine mammal. Those who do so can face court action and penalties of up two years’ imprisonment or a fine of up to $250,000.”

This whale was sighted off the Kaikoura Coast in March 2016, attracting international media attention when it appeared to breach, roll and manoeuvre despite not having an intact tail.

Humpback whales are frequent visitors to the coastal waters of New Zealand. They undertake seasonal long distance migrations (710,000 km/yr) between summer feeding grounds in high latitudes (Antarctica) and winter calving and breeding grounds in tropical or near tropical waters. They travel mainly along the east coast of the South Island and through Cook Strait during winter, and return along the west coast during spring.

Steve Harraway said, “This whale may have died about a week ago before washing ashore. With its length being less than 9 m it is probably under a year old and would have recently weaned from its mother. We don’t know what caused the death.”

Liaison is ongoing with local iwi about the recovery of any cultural items. 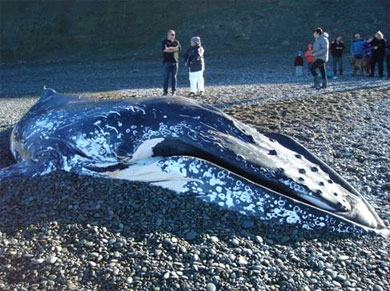 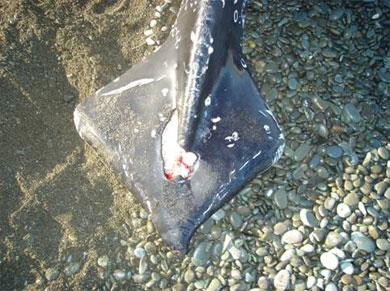