Whale with missing tail off Kaikoura

A whale with missing tail flukes is thought to be moving north from Kaikoura. We ask people to keep their distance, and report any sightings to DOC.

A humpback whale with most of its tail missing has been seen off Kaikoura.

Department of Conservation Kaikoura ranger Mike Morrissey said the whale's tail flukes were missing but the whale appeared relaxed and was moving well. 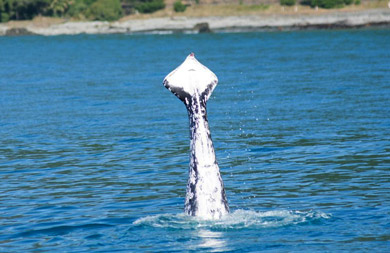 A humpback with normal tail, seen during the DOC Cook Strait whale survey

Morrissey went out by boat to check on the whale on Monday afternoon (14 March) after a reported sighting of it. He estimated the whale was about 2–3 years old. The wounds where the flukes had severed from its tail had healed indicating it had lost the flukes some time ago.

"What was left of the whale's tail was tapered like an arrow tip. It's bewildering as to how it came to lose both its tail flukes," said Mike Morrissey.

"Fortunately, the whale wasn't showing any signs of distress. It was swimming well and breaching, diving and rolling as humpback whales typically do."

The whale was seen off Kaikoura again yesterday.

DOC is asking boaties to take particular care not to disturb the whale and keep their distance from it to protect its welfare given its severe injury. Boats must be kept at least 50 metres away from marine mammals.

It is thought the whale will move north from Kaikoura as humpback whales have started their annual migration to their South Pacific breeding grounds.  Anyone who spots the whale without tail flukes as it travels up the coast is asked to report it to DOC so its movements can be tracked. Calls can be made to the 24-hour conservation emergency hotline, 0800 DOC HOT (0800 36 24 68).

Morrissey said the flukes could have severed from the tail as a result of the whale getting badly entangled in rope but it wasn't possible to be sure what had caused it. There have been occasional reports of other whales seen with damaged tails.

Morrissey said whatever caused the whale to lose its tail flukes could have occurred anywhere in its travels.