The public are asked to help DOC identify who is responsible for shooting a female sea lion/pakake on Otago Peninsula.

DOC staff on Saturday recovered the body of 11-month-old female sea lion/pakake Rua on a beach near Portobello after being shot. They are asking the public to help find who is responsible.

The sea lion had a puncture wound in her side consistent with a bullet hole and also a deep cut on the other side of her body. This morning her body was sent to the Institute of Veterinary, Animal and Biomedical Sciences at Massey University for a necropsy to determine details about the cause of her death.

DOC Coastal Otago operations manager Annie Wallace said DOC and many others in the community are devastated by this incident. 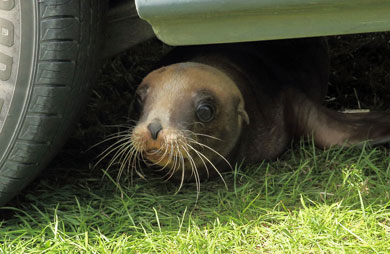 Rua delighted visitors to Warrington this year by touring the area and taking shelter under vehicles in the camping ground
Image: John Burke © 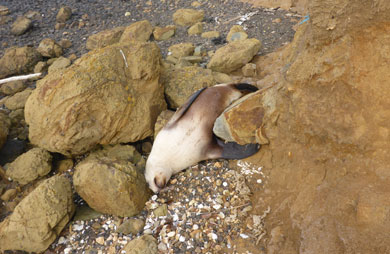 “The brutal senseless shooting of a defenceless threatened native animal is a tragedy. Rua was one of only 11 sea lion pups born on the peninsula last summer. The impact of her death on the recovery of the New Zealand sea lion is not to be underestimated. The few female sea lions around Dunedin are precious to the survival of the species. Rua was an otherwise completely healthy pup and we have every reason to believe she would have gone on to be a productive breeder,” Ms Wallace said.

New Zealand Sea Lion Trust trustee, Amelia Saxby, said, “To learn that such an abominable act can be carried out by a misguided person or group on one of our most iconic endangered species, in the wildlife capital of New Zealand, fills us with horror and shame. These feelings will be shared by the many locals who appreciate and help care for this taoka species. We hope those who carried out this reprehensible act are found and face the harshest penalty. We hope anyone who has information will come forward.”

Otakou member of Te Roopu Kaitiaki, Hoani Langsbury, said, “The loss of this female is significant to the declining population of New Zealand sea lions, which are a taoka or treasured species held in high regard. This is a species that is rare, with only limited number of females on the mainland. The death of this sea lion is significant to survival of the species on the mainland.”

A report has been made to the police and they are currently investigating the incident.

Rua was last seen alive on Allans Beach on the peninsula in September. She made the headlines last summer when her birth at Warrington beach was embraced by the Warrington community, who named her, watched over, protected and cared for her.

The New Zealand sea lion is found only in New Zealand, and is one of the world’s rarest sea lions. With only about 10,000 remaining their threat status is nationally critical, the highest threat classification in New Zealand – a status shared with kiwi and kākāpō.

Breeding is mostly restricted to the New Zealand subantarctic, although a slow return to mainland New Zealand is now occurring. Otago Peninsula is one of the few breeding sites for this species.

All sea lion pups born on Otago Peninsula are tagged as part of ongoing research by DOC, the University of Otago and the New Zealand Sea Lion Trust.

A sea lion threat management plan is currently being developed by DOC and the Ministry of Primary Industries.

New Zealand sea lions are one of the rarest sea lion species in the world and are only found in New Zealand.