Fighting kauri dieback in the Waikato

DOC has installed a new boot cleaning station on the popular Hakarimata Walkway.

The Department of Conservation has installed a boot cleaning station at the Huntly end of the popular Hakarimata Walkway, in order to help prevent the spread of kauri dieback disease.

Although the disease has not been discovered in the Hakarimata reserve, it is caused by the microscopic spore Phytophthora Taxon Agathis (PTA) and can easily be spread through contaminated footwear and equipment. 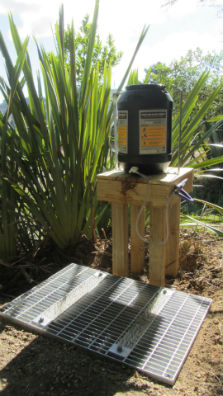 The cleaning station, sited at the Parker Road entrance to the Hakarimata Kauri Loop section of the walkway, is part of DOC’s ongoing work in managed kauri forests to stop the disease from spreading. Public information signs have also been installed at strategic places on the track.

DOC Services Ranger Mark Menzies said the reserve had become more and more popular with visitors in recent years, especially since the “stairway to the summit” steps had been opened at Ngaruawahia’s Brownlee road entrance in 2012.

“The Hakarimata Walkway is part of Te Araroa – The Long Pathway, a walking trail from Cape Reinga to Bluff. The Kauri Loop Track takes visitors to a kauri grove containing one of the largest trees in the Waikato and estimated to be 1000 years old,” Mark Menzies said.

Government allocated $21.6 million to DOC in last year’s budget for upgrading tracks through northern North Island kauri forest to prevent the spread of dieback. Other Waikato tracks are being inspected as part of an ongoing programme and will be upgraded as necessary.

The money will be spent over the next four years, with $10.7 million allocated to track improvements and $10.9 million on operation costs.

Kauri can live for a thousand years yet 'kauri dieback' or 'kauri collar rot' is slowly killing our native giants.