It’s been a bumper whio/blue duck breeding season both on and off the rivers throughout New Zealand.

It’s been a bumper whio/blue duck breeding season both on and off the rivers throughout New Zealand.

More than 70 ducks bred, hatched or raised in captivity are being released back into the wild, and increased numbers of wild bred birds have been reported on rivers throughout the country.

"The Taranaki recovery site went from no whio in 2002 to the stable population it now boasts, thanks to ongoing releases from the Whio Breed for Release programme", says DOC’s National Whio Recovery Group Leader Jess Scrimgeour.

"Having a successful predator trapping programme now in place in the national park has allowed the duck, once extinct in Taranaki, to continue to grow in numbers," she says.

Another ten whio from the Turangi hardening facility will be released into the Tongariro National Park area on 25 March.  A further 11 captive bred birds will be released sometime in March at North Island sites still to be decided. 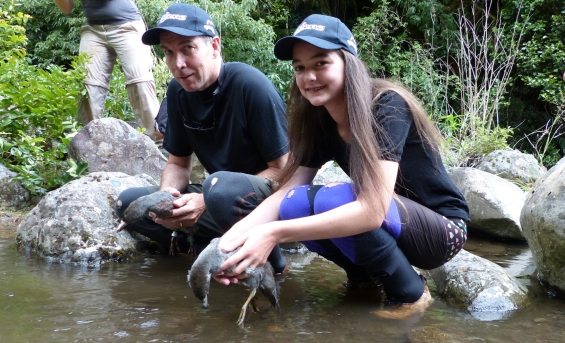 Releasing whio on the Mangetapopo River in Tongariro National Park.

The North Island has also been having an awesome season in the wild says Jess with preliminary figures showing most of the security and recovery sites having high numbers of juvenile birds on the rivers.

In the South Island, this has been the most successful season for the Central West Coast Whio Operation Nest Egg (WHIONE) programme, and in the Wangapeka-Fyfe whio security site in Kahurangi National Park, rangers have seen the most productive breeding happening in 11 years.

West Coast Rivers are now home to 25 juvenile ducks released over the last couple of weeks. Taipo River is now home to an extra ten whio, Arahura to five, Moonlight to six and Styx River to another four whio. 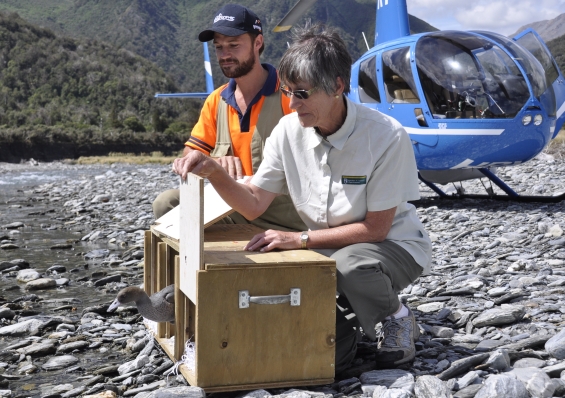 Under the WHIONE programme whio eggs taken from  nests on the West Coast, and transported to Christchurch where they are incubated, hatched and reared in a hardening facility at the Isaac Conservation and Wildlife Trust.

"They are returned to rivers when they are less vulnerable to stoats and other predators," says Jess.

March is Whio Awareness month and a number of whio related activities are being held around the country including the whio releases in Kahurangi, Egmont and Tongariro National Parks; whio celebration release at Egmont National Park on February 25th; a whio celebration day at Tapuwera School in the Nelson area on 5 March, a whio display at WOMAD in New Plymouth 13 – 15 March;  whio day at the Esplanade in Palmerston North on 22 March and Whio Family fun weekend at Auckland Zoo on 28 - 29 March.

The annual online Great Whio Adventure competition will run from 2 March until 2 April on the Whio Forever website. An awesome five day family holiday in either Tongariro or Fiordland National Park, including a day out with the whio rangers is up for grabs again. This year children can enter the competition once a week for five weeks with the online quiz changing each week.

Genesis Energy and DOC have partnered together in a five year programme to secure the future of this unique vulnerable native bird. Operating under the name of Whio Forever this partnership is fast tracking implementation of the national Whio Recovery Plan to protect whio and increase public awareness.