The toxin in biodegradable 1080 bait makes up 0.15% of each pellet. The rest is cereal, sugar, flavour and dye. Deer repellant may also be added. 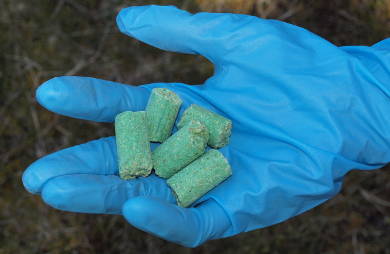 1080 is the common name for a biodegradable poison called sodium fluoroacetate. It's made synthetically, but fluoroacetate is also produced naturally by some plants to deter browsing.

Cereal, sugar, flavour and dye are added to most of the 1080 pellets used for pest control in New Zealand.

Deer repellent may also be added.

Modern 1080 operations have little in common with those of the 1960s. Unfortunately, old stories continue to circulate, creating a false picture of today’s conservation efforts.

This high bait loading, combined with many small bait fragments, or ‘chaff’, led to high rates of poisoning in non-target species in certain cases.

Extensive research and development has changed the way DOC and other organisations use 1080.