The rare Sinbad skink is found only in an alpine habitat in Fiordland.

The Sinbad skink, Oligosoma pikitanga, is a rare species of medium sized skink endemic to New Zealand where it lives in an alpine habitat in Sinbad Gully, Fiordland National Park.

It is one of two species of New Zealand skink found in the Fiordland region of the South Island that lives exclusively in the alpine zone, the other being the closely related and morphlogically similar Barrier skink, Oligosoma judgei.

The species was discovered in 2004 by New Zealand herpetologist Tony Jewell and it was formally described in 2008. The word 'pikitanga' means mountain climber. 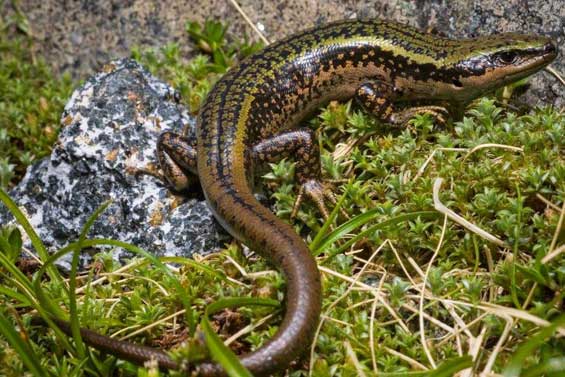 The Sinbad skink is at risk of extinction from predators such as rats, stoats and mice. It is listed as 'Nationally Endangered' under DOC's Threat Classification system – the second-highest priority for conservation action..

Sinbad Gully is being protected by stoat trapping, sponsored by local tourism company Southern Discoveries. The traps protect whio, kiwi and mohua. There are plans to extend and refine predator control in the area surrounding the skinks.

The Sinbad skink is a medium to large sized skink. The toes and tail are very long and the upper surface colouration is black on the back with prominent green speckles, varying to predominantly green with black mottling. The sides are black and spotted irregularly with pink or grey and the belly is a vivid orange colour – the last feature provides easy distinction from other, similar skink species found in southern New Zealand.

It is thought to be vivaparous (give birth to live young) like almost every other Oligosoma species.

Sinbad skinks are agile and fast moving and are diurnal (active during the day) and avid sun baskers. Despite this, individuals can be hard to find, keeping a low profile amongst low vegetation and seldom venturing out into the open.

The elongate body shape and relatively high scale counts suggest a saxicolous (rock dwelling) existence similar to that seen in closely related species with similar features such as the Grand skink and Scree skink.

The striking green colouration also suggests a strong association with the vegetation of its habitat.

Very little is known about the Sinbad skink and the incredibly harsh weather conditions in Sinbad Gully - which has an annual rainfall up to 12 m a year and an average year round temperature of just 6.5 degrees celsius – as well as the dangerous nature of this skink's cliffside habitat mean that its behaviour is very poorly known. 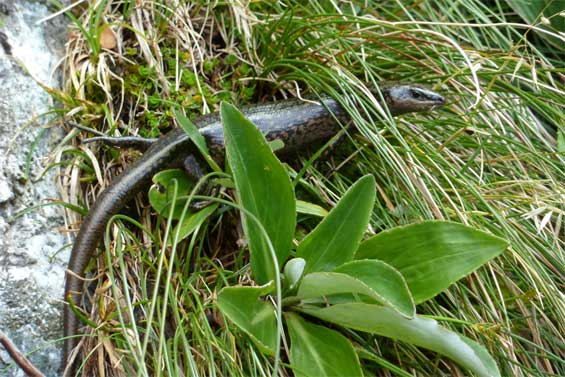