The chevron skink is one of New Zealand's rarest and most secretive lizards.

It is listed as 'nationally vulnerable' under DOC’s Threat Classification System.

They are currently only known to be found on Great Barrier Island / Aotea and Te Hauturu-o-Toi / Little Barrier Island in the Hauraki Gulf. There have only been around 500 sightings reported since it was first described in 1906.

Most of these sightings have been as a result of recent DOC surveys and monitoring, but several have also been recorded by members of the public on Great Barrier Island.

What's in a name?

Chevron skink belongs to the genus Oligosoma (formerly Leiolopisma), members of which are only found in New Zealand.

Maori know the chevron skink as ‘Niho Taniwha’ meaning ‘teeth of the Taniwha’ in reference to the very distinctive v shaped markings on it’s back. These chevron like patterns also give the lizard its common name.

Lost for over 60 years

First scientifically described in 1906, the chevron skink was only reported twice more until the 1970s. It had essentially been 'lost' from science for over 60 years. This was partly due to a mix up of museum labels that gave its locality as Flat Island in the Mokohinau Islands group. The label should have read Great Barrier Island.

On Great Barrier they have now been recorded all over the island including up near the summit of Mt Hirakimata (over 600 m a.s.l). Historical records suggest that they may also have occurred on the mainland in the past. 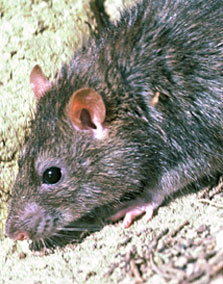 DOC currently controls feral cats in one large catchment on Great Barrier Island and community groups are also managing or eliminating cats and rats over several hundred hectares of private land in other parts of the island.

Little Barrier Island (Hauturu) is now completely free of introduced mammalian predators with the eradication of kiore in 2004. It is hoped that these initiatives will assist the continued survival of chevron skinks.

Vehicles are often overlooked as a threat to wildlife however many of our native species often become casualties on our roads.

Despite there being little traffic on Great Barrier Island, several chevron skinks and other lizards are run over on the islands’ roads each year when they come out on to the warm roads to bask.

It is thought that one of the reasons why the chevron skink has survived on Great and Little Barrier islands is due to these islands being free of certain introduced predators such as stoats, weasels and ferrets (mustelids) and Norway rats. Should any of these problem animals become established on these islands it would have disastrous consequences for the chevron skink.

Like all other rodents in New Zealand, Norway rats are known to eat lizards. If the Norway rat managed to colonise on Great or Little Barrier Island the chevron skink would face a great threat of extinction.

Norway rat would be a particular threat to the skink as it prefers to live along water courses and in wet places. These are the same kinds of places where chevron skink have been found.

Between 1997 and 2002 an intensive research project was carried out on Great Barrier Island / Aotea looking at chevron skink habitat requirements. This study identified stream sides and damp areas as being the most likely places to find chevron skinks.

Reliably finding the skinks due to their secretive behaviour and excellent camouflage made this study a challenge and changed the focus of the research to investigating better detection techniques for cryptic lizard species such as these.

Trials using captive chevron skinks at Auckland Zoo were conducted to develop new detection methods which were subsequently tested in the field on Great Barrier.

Knowledge gained from this research combined with previous work on chevron skink physiology and habitat use has allowed DOC to start to assess the effect of predator control on chevron skinks.

This work is currently being conducted in conjunction with Glenfern Sanctuary, a private predator controlled area on Great Barrier Island. 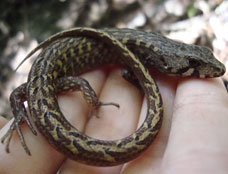 All sightings of chevron skinks are important. They help to contribute to the knowledge of this rare lizard. If you think you see a chevron skink when on Great Barrier Island, please report it to the local DOC office, ph +64 9 429 0044.

Several chevron skinks are caught each year by domestic and feral cats.  Sometimes these skinks can be saved if they are found in time and treated.  If you find an injured chevron skink contact DOC immediately on the above number. Successfully rehabilitated chevron skinks are released on the island at "safe" sites where predators are controlled.

Do not bring any unwanted pests to Great or Little Barrier islands. A permit from DOC is required to land on Little Barrier Island. However, ship and Norway rats are capable of swimming several hundred metres, so even boats moored near the island could accidentally introduce these pests. Keep rodent bait stations on your boat to minimise this risk.

If arriving at Great Barrier by boat, or bringing freight, containers or buildings to the island, please check for stowaways such as possums, rats, mustelids and Argentine ants. If you see any of these unwanted pests on the island, contact DOC immediately.

Aotea Conservation Park has the only multi-day wilderness walk in the Auckland region, boasting two DOC huts and numerous campsites.

Te Hauturu-o-Toi can only be visited with a permit. Permits are issued for research, education, cultural or management purposes.