The Barrier skink is known only from alpine habitats at three sites in the south-western South Island.

The Barrier skink, Oligosoma judgei, appears to have been discovered in 1966 when G. Choate collected an animal from Student Peak in the Darren Mountains, Fiordland. Although this specimen was lodged in a museum collection, its significance was unrecognised until the 2004 discovery of  the Sinbad skink in Sinbad Gully followed by the 2005 discovery of Barrier skink on Barrier Knob in the Darran Mountains.

The species was formally described in 2009. 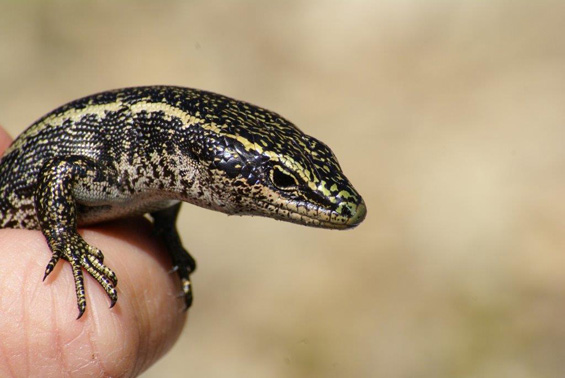 The Barrier skink is thought to be very rare and is viewed to be at risk of extinction from predators such as rats, stoats and mice. It is listed as 'Nationally Endangered'’ under DOC's Threat Classification system – the second-highest priority for conservation action.

Barrier skinks have since been found in scree habitat in the Cheviot Hills. Barrier Knob and the Cheviot Hills are separated by a distance of about 100 km and have markedly different geologies . This indicates that the Barrier skink could potentially occupy many mountain ranges in this area.

Barrier skinks are living in what is considered unusual and difficult environments for ectothermic (cold-blooded) animals. The mean annual temperature of the area is only 6.5 degrees celsius and the mean minimum of the coldest month is -0.7 degrees celsius. Sinbad and Barrier skinks living in these high altitude areas must survive exposure to rain bearing clouds, westerly winds and low sunshine hours.

Current knowledge suggests habitat prerequisites are north facing alpine areas with deep rock crevices or scree, for protection from snow and the elements.

Population estimates, habitat, microhabitat, distribution and other ecological factors are yet to be explored. It cannot even be said with certainty that either Barrier or Sinbad skink species are strictly adapted specifically for alpine living as the skinks may have been pushed into these alpine zones, seeking refuge from introduced pests.