These baleen whales can be recognised easily by their strongly arched mouth, lack of dorsal fin and V-shaped blowhole spray.

Their head and lower jaw is covered with callosities; large, white, rough growths on the skin that are usually infested with parasitic worms, whale lice and barnacles. The number and arrangement of these are unique to each animal, making it possible to identify individuals and track their movements.

Your help is urgently sought to look out for tohorā around New Zealand and to report sightings immediately.

Southern right whales (Eubalaena australis) are typically black in colour but can have irregular white patches. The flippers are large and paddle-shaped. Tohorā are slow swimmers but are very acrobatic. They are also inquisitive. These are migratory animals and are circumpolar, mainly between 20°S and 55°S. Two northern species also exist – North Atlantic and North Pacific right whales. Tohorā are a native migrant to New Zealand and are the only large baleen whales that can be seen from the beach. During the breeding season in winter and spring, they are mostly found in the waters around the subantarctic Auckland and Campbell Islands but there are occasional sightings around mainland New Zealand.

These whales can come very close to shore. Aggregations tend to form at feeding grounds, despite many animals typically being solitary or part of a very small group. Dives may last up to an hour but are usually much shorter. Tohorā feed on planktonic crustaceans such as copepods and forage using a technique known as skim feeding, where they open their mouths and slowly swim through large concentrations of prey. As water enters their mouth, prey is sieved from the water and becomes trapped in their fine baleen plates.

Mating takes place in warm waters in winter with gestation lasting for about 11 months and weaning for about another year. Females are sexually mature at around eight years old with calving generally occurring regularly every three years.

Killer whales may occasionally kill tohorā. They are known to form hunting packs to take down larger whales but the success rate and frequency of this is largely unknown. Other potential predators are large sharks. Predation is likely to affect calves more than adults. It is possible that such attacks were one of the pressures leading to the evolution of right whales’ use of shallow coastal habitats for calving.

Southern right whale populations suffered dramatic losses due to whaling as they were deemed the “right” whales to catch: they were easy to approach, lived close to shore and provided large quantities of meat, oil and whalebone. Both Southern and Northern species came close to extinction and only the Southern is showing signs of recovery.

Present day threats include fishing, coastal development and human harassment. Incidental entanglement in fishing gear has been recorded, with both active fishing gear and lost “ghost” gear posing a threat.

Marine farms and coastal development results in the loss of habitat and can pose problems in terms of competition for both space and food.

Ship strike has also been reported, highlighting the importance of following the Marine Mammal Protection Regulations (1992) when in contact with cetaceans. A combination of these threats no doubt explains why tohorā no longer occur in Wellington Harbour. 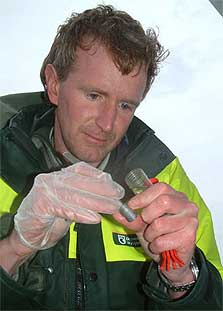 A nationwide research project into the movement patterns of southern right whales was established in 2003. DOC continues to gather sighting information from the public as well as using photo-identification and genetic samples to determine the population status of individuals seen around mainland New Zealand.

Current protection and the way forward 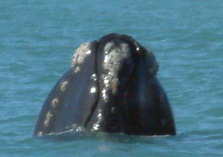 A southern right whale off the
coast of Hokitika. Photo taken with zoom lens

How to identify a southern right whale

These whales can come very close to shore. Adults average 14-15 m and newborn calves between 4.5 and 6 m. Southern right whales are mostly black in colour and can easily be identified by lack of a dorsal fin, a V-shaped blowhole spray and white growths on their heads called callosities.

The pattern of callosities on each whale is different making it possible to identify individuals and to track their movements.

Why sightings are important

During the breeding season in winter and spring, they are mostly found in the waters around the subantarctic Auckland and Campbell Islands but there are occasional sightings around mainland New Zealand. When they visit the mainland, they are often very close to shore in sheltered waters. This is exciting as it provides a rare opportunity for members of the public to see whales from the shore.

We can use the information gathered from sighting reports to monitor the recovery of southern right whales in New Zealand mainland waters.We can keep track of where they go, and find evidence of the whales starting to breed again in mainland New Zealand which would be a really exciting step in the recovery of this species.

Watch The Lost Whales documentary on NZOnScreen: For 150 years, southern right whales (tohorā) were hunted to the brink of extinction, but the discovery of a "lost tribe" in the Southern Ocean sparked hope that their numbers are increasing.