The blue whale is the largest animal in the world. There are two sub-species of blue whales in the Southern Hemisphere, the Antarctic (or true) blue whale and the pygmy blue whale.

A blue whale population lives in New Zealand waters for part of the year. They don't just pass through on annual migrations, but it's unknown for how much of the year they are present. Acoustic and field research indicates this population has its own distinctive song, and a foraging ground was identified off the coast of Taranaki (South Taranaki Bight) in 2014.

There are two sub-species of blue whales in the Southern Hemisphere, the Antarctic (or true) blue whale and the slightly smaller (but still very large) pygmy blue whale. True blue whales migrate to the Antarctic oceans to feed during summer months, but their distribution outside this period is relatively unknown. 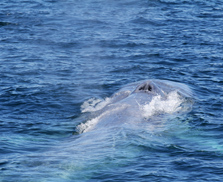 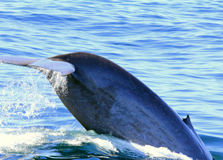 Pygmy blue whales do not migrate south to feed near Antarctica, but stay in more northern waters. It is currently unknown which sub-species (or perhaps both) occur in New Zealand waters.

All blue whale populations were severely exploited by commercial whaling in the 20th century. This reduced the Antarctic population to less than 1% of its original size, from an estimated 200,000 animals to less than 2,000.

Blue whales do not live in the pods common for other whale species, preferring a solitary life with occasional aggregations for breeding and foraging. They are found in small numbers throughout the world's oceans except the Mediterranean and the Arctic. Blue whales are baleen whales and their main diet is krill.

The loudest of all whale species

They do not use echolocation to navigate, but they do have the loudest, strongest vocalisations of all the whale species. This may be an adaptive feature of their solitary nature, enabling widely distributed individuals to keep track of other blue whales through contact calls.

Only males have been recorded using longer sequences – songs – leading to speculation that this may be a function of mating behaviour.

Because so few blue whales survived the industrial-scale whaling period, their maximum age is not yet known, however estimates of 60-110 years have been proposed.

New Zealand was a major centre for whaling throughout the 19th and early 20th centuries, as large whales migrated up the east coast of both the main islands, and used some harbours for calving. Blue whales were not hunted until the 1920s, because their speed made them harder to catch than sperm, right and humpback whales.

It was only when these species were seriously depleted, and faster ships had been built, that whalers turned their attention to blue whales. Most were killed in Antarctic waters by many whaling nations, but New Zealand-based whalers occasionally killed them when they saw them in coastal waters. 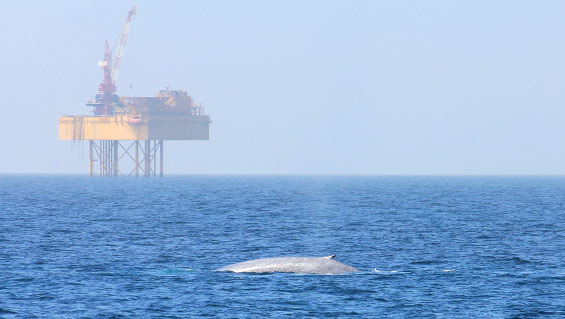 Blue whale near an oil rig in South Taranaki. A blue whale foraging ground was identified off the coast of Taranaki in 2014
Image: Deanna Elvines (Cawthron Institute) & OMV NZ Ltd ©

Blue whales have been protected from whaling since 1966 by the International Whaling Commission, though some were hunted illegally until 1972. It is not known whether the population is recovering, or whether the drastically depleted genetic pool will affect their ability to healthily reproduce.

There is concern that noise pollution may affect blue whales' ability to communicate, particularly in New Zealand where there is persistent seismic activity for oil and gas extraction near a blue whale foraging ground. Climate change may also affect blue whales throughout the Southern Hemisphere by depleting or shifting the distribution of prey.

While ship strike is not thought to be a major source of mortality in New Zealand waters – because there is relatively little vessel traffic – there has been a recorded case. Death from ship strike is common off the coast of Mexico and California, where blue whale feeding grounds and migration paths overlap with a major shipping lane.