Despite its confusing name, the killer whale is actually the largest member of the dolphin family.

The killer whale/orca (Orcinus orca) is well known and can be identified relatively easily by its distinctive black and white markings and very tall, prominent dorsal fin. They can grow up to 9 m in length, with male dorsal fins reaching higher than a metre.

Orca flippers are large and paddle-shaped and overall the body is robust. They are acrobatic and are commonly seen breaching and flipper-slapping.

Females and males differ in that males are longer and bulkier than females and females have smaller, more curved dorsal fins, and smaller flippers. 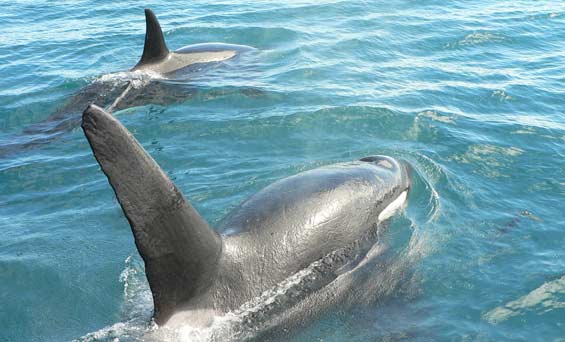 Despite its confusing name, the killer whale/orca is actually the largest member of the dolphin family

Where to find orca

Orca are the most widely distributed mammal on earth with the exception of humans. Its distribution is patchy however and it is more commonly seen at the poles and in cooler waters.

They prefer deeper water but can be found in shallow bays and estuaries, and in inland seas.

Orca can be found all throughout New Zealand's coastline.

Pods of orca are known to venture into Wellington Harbour throughout spring and summer looking for a unique food source (orcas in other parts of the world aren't known to do this), but it is rare for them to stick around.

They dig in the muddy sea bottom for stingrays and are often seen hearding them into shallow water around Oriental Parade, Frank Kitts Park, and The Lagoon. Passers-by have even watched as one stingray made a frantic leap for safety onto nearby rocks, later to be assisted back into the water by a nearby observer.

Orcas are also often seen exploring the northern end of the harbour and the Kapiti Coast.

See this factsheet about orca in Wellington (PDF, 873K).

New Zealand is home to an estimated 150–200 individuals, which travel long distances throughout the country’s coastal waters.

Orca are typically encountered in family groups or pods. Pods are usually formed for life and can result in the development of unique dialects.

These dolphins have an extremely diverse diet and are the only known cetaceans that regularly prey upon other marine mammals. Attacks or kills have been documented on more than 35 species, including blue whales.

Fish species are also important in their diet, such as salmon, tuna, herring, cod, sharks and rays. Squid, octopus, sea birds and sea turtles are also eaten. Orca hunt cooperatively and are even known to intentionally strand themselves on beaches temporarily in order to catch seals.

Females give birth to their first calf between 11 and 16 years of age and tend to do so every five years for their 25-year reproductive life span. The gestation period is 15-18 months and calves are nursed for at least one year.

Females are known to live up to 80 or 90 years. Males reach physical maturity at about 21 years and live for a maximum of 50-60 years. 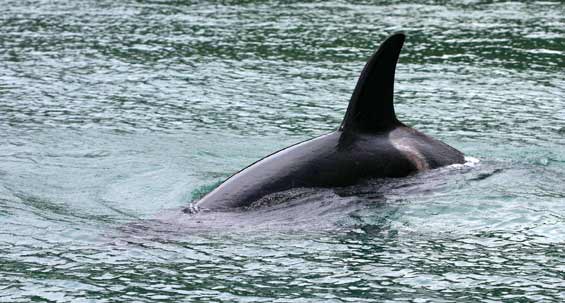 Orca can be identified relatively easily with its distinctive black and white markings and very tall, prominent dorsal fin

Historically, orca were targeted by fishers for human consumption but no significant hunting occurs today.

Nowadays, one of the greatest potential impacts is likely to be disturbance caused by vessel traffic. The presence of boats is known to disrupt the normal behaviour of these animals, particularly resting, and underwater noise may disrupt echolocation signals and other communication.

As orca are at the top of the food web they are particularly susceptible to pollution via bioaccumulation (the accumulation of toxins through the food chain).

One of the key threats to this species is disturbance by recreational vessels, both through noise pollution and boat strike, and research is aimed at determining ways in which this can be reduced to minimum levels. 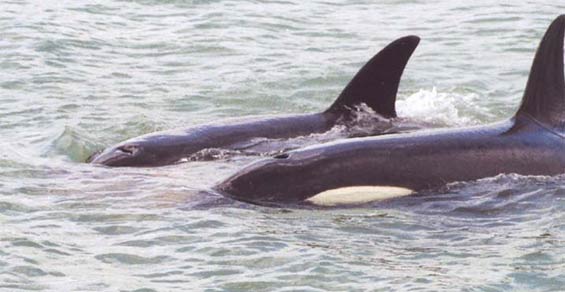 Orca swimming at Raglan in Waikato

Under the Marine Mammals Protection Regulations 1992 it is an offence to swim within 100 m of a whale.

For the purpose of the protection regulations, a whale is defined as all species commonly known as whales; and includes baleen whales, sperm whales, beaked whales, killer whales, and pilot whales. The penalty for breaching the regulations is a $10,000 fine.

In addition to swimming, it is an offence to harass, disturb, injure, or kill marine mammals. Anyone charged with harassing, disturbing, injuring, or killing a marine mammal faces a maximum penalty of two years imprisonment or a fine to maximum of $250,000. Check the Marine Mammals Protection Regulations 1992 for a list of the conditions governing behaviour around marine mammals.

When boating in the vicinity of orca, common sense rules apply and regulations exist so disturbance and danger are minimised.

Orca are predators with quite a reputation, but no records exist of deliberate fatal attacks on humans.

It still pays however, to show respect around these animals. Follow these rules when sharing the ocean with orca.

Aircraft should also maintain a safe distance of at least 150 m from orca and should not fly directly overhead.

Keep their environment clean by carefully disposing of any rubbish in appropriate receptacle, plastic waste can be particularly hazardous when discarded near waterways or beaches.

Find out how you can help in a stranding

Sightings of orca can be reported by calling 0800 DOC HOT (0800 362 468), or by filling out an online form. These are always of interest and help increase our knowledge of cetacean distribution and movements around New Zealand.

You can also download the marine mammal sighting form (PDF, 416K) or (Word, 4,300K). These forms include images of marine mammals to help with species identification.

If you accidentally catch or harm a dolphin you have a legal obligation to report it as soon as possible, but within 48 hours, to DOC or MPI.