New Zealand’s streams are home to macroinvertebrates - tiny animals that live on and under rocks, waterplants, wood or debris. They have no backbones and can be seen without a magnifying glass or microscope.

New Zealand’s streams are home to hundreds of tiny animals that live on and under rocks, waterplants, wood or debris. These animals include insects, crustaceans such as freshwater crayfish (koura), molluscs such as snails and mussels, worms and leeches.

They range in size from less than 1 mm long to over 10 cm long and can often be hard to see at first glance. Together these types of animals are called ‘macroinvertebrates’, meaning they have no backbones and can be seen without a magnifying glass or microscope.

New Zealand has over 200 species of freshwater macroinvertebrates, with many species still awaiting discovery. They live in a range of environments, from the muddy bottoms of lowland streams to the gravelly streams of our mountain forests. They make up a large part of New Zealand’s biodiversity.

Macroinvertebrates are adapted to feed on a wide range of different things:

Macroinvertebrates, such as mayflies, stoneflies, caddisflies and crayfish are usually found in healthy streams, macroinvertebrates such as worms, midges, snails and leeches are more tolerant of polluted or muddy streams.

Many species spend their juvenile stage in the stream and then emerge onto land as they develop into adults. Some of these species need stream-side plants to complete their life cycles. 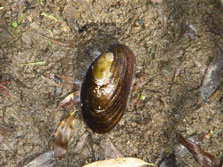 The next time you visit a stream, pick up a rock or object from the stream, look closely and see how many different macroinvertebrates you can find.

Water surface bugs like Hydrometra and Microvelia skate around the top of ponds or backwaters. They have mouths shaped like a beak or tube.

Backswimmers and waterboatmen swim in ponds, lakes and slow-flowing streams. You can find lots of them in rivers after long dry spells.

Diving beetles are usually found in slow-flowing waters, particularly weedy ponds. These beetles have hard covers over their wings which they use to trap air bubbles for breathing. Some have special swimming hairs on their legs.

Dragonfly larvae have wide, chunky bodies and an extendible jaw. They are found in a wide range of stream types in low numbers and are most common in lakes and ponds.

Snails like slow-flowing waters where there are lots of things like algae to eat. Snails can control the amount of slime on some riverbeds.

Leeches are common in New Zealand, especially in weedy streams. Native New Zealand leeches don’t feed on people but prey on other stream invertebrates. Their bodies are very flexible and they move like caterpillars.

Freshwater shrimps, particularly the widespread Paratya, love weedy streams and estuaries. They feed constantly, so are interesting to watch.

Damselfly larvae live in the water; as adults they live on land. They have thin bodies, extendible jaws and three tail gills. They prey on other bug.

Mayfly larvae such as Nesameletus have three feather-like tails, which help them swim quickly through the water, and feathery gills along both sides of their bodies that they use to breathe.

They are fussy about the water they live in and like cool, clean, well-aerated waters to live in. Polluted water can cause deformations to their wings and clog up their gills, making it hard for them to fly and breathe.

Caddisflies include many species, some build sophisticated ‘houses’ from stone, sand or plants; others are ‘free-living’. Watch out for Triplectides, which lives inside bits of stick, Helicopsyche, which builds a spiral case out of sand, and the smoothcased Olinga, which appears in clean-water streams.

The adults resemble moths and range in size from just a few mm to about 8 cm (if you include their long antennae!)

Dobsonflies or toe-biters are the largest of our stream insects and are most common in good quality stony streams. They have leg-like gills along their body and biting jaws, which can give human fingers a good nip! They are the only representatives of their family in New Zealand.

Stonefly nymphs like those of the long-tailed Zelandoperla have two tail strands. Only the green stonefly Stenoperla has gills along the sides of its body – many have gills between the tails. Stoneflies are most common in fast-flowing, stony-bed streams with cool water.

Only the female of both mosquitoes and sandflies bite. Sandflies use our blood to help produce eggs, which are then laid under stones and plants in flowing water.

Mosquito larvae start their life in standing water such as pools on a flooded forest floor. There are 13 native species of mosquito (plus 3 introduced ones), and about 11 different species of sand fly in New Zealand.

The New Zealand Threat Classification System is used to assess the threat status of our taxa (species, subspecies, varieties and forma).