Close up of an eel during a feeding session

Eels migrate up streams as elvers to find suitable adult habitat. After many years they return to the Pacific Ocean to breed and die.

There are two main types of eel – the shortfin and the longfin. There are fewer eels today because of the loss of wetlands and historical commercial fishing practice.  Currently the commercial eel fishery is managed by the Ministry for Primary Industries under the Quota Management System.

Eels migrate up streams as elvers to find suitable adult habitat. After many years (15-30 years for shortfins, 25 years for longfins, and sometimes up to 80 years) they migrate to the Pacific Ocean to breed and die. Eels are secretive, mainly nocturnal and prefer habitats with plenty of cover.

The ancestors of modern New Zealand eels (like Anguilla dieffenbachii) had been swimming up and down New Zealand waterways since at least the early Miocene (23 million years ago). The longfin eel is one of the largest eels in the world and it is found only in the rivers and lakes of New Zealand. Longfin eels are considered At risk, declining.

Tuna (the Māori word for eels) are not only historically important to Māori, they are our taonga today. But pressure on some species is resulting in their decline.

At first glance, all New Zealand freshwater eels look the same. But each species is unique in its own way. Learn about the differences between the species and how to tell them apart.

About the longfin eel

Longfin eels can be found throughout New Zealand. They live mainly in rivers and inland lakes but can be found in almost all types of waters, usually well inland from the coast.

They are legendary climbers and have made their way well inland in most river systems, even those with natural barriers. Elvers (young eels) swimming up river will climb waterfalls and even dams by leaving the water and wriggling over damp areas. It is not unheard of for an eel to climb a waterfall of up to 20 metres. 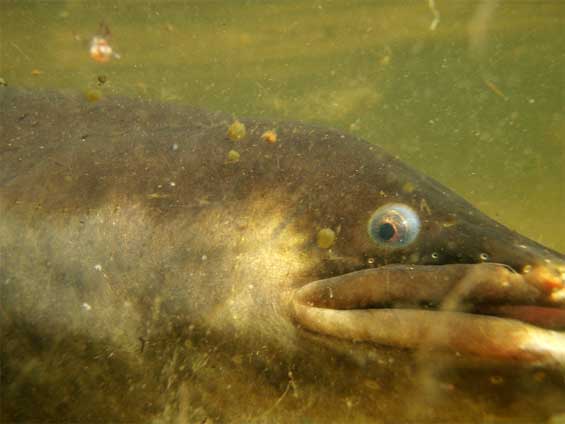 When eels begin life, they are a tiny one millimetre in length. During their life, they can grow up to two metres long.

Compared with many other fish, eels are slow growing - a longfin may grow only between 15-25mm a year. They can also live for many years. Large longfins have been estimated to be at least 60 years old.

The biggest eels are usually old females that have been slow to reach sexual maturity and, for reasons that are not yet understood, have not migrated to sea to breed.

The biggest longfin eels reported have weighed as much as 40 kg. Pictures of fishers and huge eels used to appear regularly in local newspapers. But today, you’ll seldom find an eel heavier than 10 kg.

In shape, eels are elongate, slender-bodied fishes, almost tubular. When they are small, they have relatively smooth heads but as they grow the head becomes bulbous, with a prominent muscular dome behind the eyes.

They change shape again when they get ready to migrate to their breeding grounds. The head becomes much more slender and tapered, almost bullet-like and the eyes enlarge to up to twice their normal size.

Like all fish, eels have scales and fins. The longfin eel is so named because its top (dorsal) fin is longer than its bottom fin.

While they have the appearance of being scaleless, tiny scales are embedded deeply within their thick, leathery skin. The eel’s skin is very sensitive to touch. This helps it to "see" in its watery environment.

In colour, longfins are usually dark brown to grey black. Very occasionally, longfin eels found in the wild are partially or even wholly bright yellow in colour.

Eels eat "live" food. Small longfin eels living amongst the river gravels will feed on insect larvae, worms and water snails. When they get bigger, they begin to feed on fish. They will also eat fresh-water crayfish and even small birds like ducklings.

During the day, eels are secretive, hiding under logs and boulders or under riverbanks. Occasionally, they may be seen out hunting for food but most of their hunting takes place at night.

Eels hunt by smell rather than sight. Longfin eels have a well-developed sense of smell. They have tube nostrils that protrude from the front of their head, above their upper lip.

They also have a very large mouth with rows of small, sharp, white teeth. The top teeth form an arrow shape on the roof of the eel’s mouth.

Longfin eels breed only once, at the end of their life. When they are ready to breed they leave New Zealand and swim all the way to the sub-tropical Pacific Ocean to spawn, probably in very deep ocean trenches.

When they reach their destination, the females lay millions of eggs that are fertilised by the male. The larvae are called leptocephalus and look nothing like an eel – they are transparent, flat, and leaf-shaped. The larvae reach New Zealand by drifting on ocean currents.

Before entering fresh water, the leptocephalus change into a more familiar eel shape, although they remain transparent for up to a week after leaving the sea. These tiny "glass" eels enter fresh water between July and November each year, often in very large numbers.

Eels take many years to grow and it could be decades before an individual is ready to undertake the long migration back to the tropics to breed. The average age at which a longfin eel migrates is 23 years for a male and 34 for a female. The adults never return as they die after spawning.

While longfin eels are still relatively common, fishing has had a significant impact on the species. Europeans showed little interest in eels as a fishery until the 1960s when commercial catches rose steadily.

In 1975, eels were the most valuable fish export after rock lobsters. Five years later, they were the fifth most valuable finfish export. This big increase in fishing effort led to significant stock reductions in some areas, with a marked decline in the average size of the eels caught.

Habitat loss also affects eels. Changes caused by hydro development, drainage and irrigation schemes and river diversions affect eels by reducing their habitat and the water available for aquatic life. Culverts and dams can also impact on eels by preventing their migration.

Eel habitat is also impacted by pollution. Sewage and effluent from meat works and pulp and paper plants discharged into rivers can remove large quantities of oxygen from the water. The result of this oxygen depletion is that the fish will either die or move away.

Report: Status and management of the longfin eel

On a pathway to extinction? An investigation into the status and management of the longfin eel - April 2013

Eels on the move

Hydro dams stop eels moving freely up and down some rivers. To get around this problem eel passes have been built across some dams to help the eels complete their journey. Young eels may also be moved across the dams by hand.

Many of us don't exactly have a very favourable opinion of eels. But at Pukaha Mount Bruce, there’s a lot to learn about tuna/eels and the incredible journey they must make to survive.

Watch a short video about the worlds largest eel, the longfin eel.