With a population of fewer than 40 individuals that includes approximately 9 breeding pairs, the New Zealand fairy tern is probably our most endangered indigenous breeding bird.

It is ranked as an endangered species, and carries a 'Category A' priority for conservation action. A Department of Conservation Recovery Plan is currently in action.

Records from the 19th century suggest that NZ fairy terns used to be widespread around the coast of the North Island and eastern South Island, but were not abundant in any one area.

New Zealand fairy terns are now confined to the lower half of the Northland Peninsula. Breeding is limited to four regular sites: Waipu, Mangawhai, Pakiri and the South Kaipara Head. 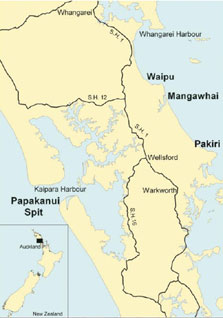 Fairytern construct their nests on exposed, low-lying areas of shell-covered sand. The nest is a simple scrape in the sand, set amidst the shells.

The most likely causes of population decline are:

Nesting in a small scrape in the sand, these delicate sea birds are very vulnerable. Nest sites are roped off and signs erected to alert people to the area.

Department of Conservation staff and volunteers talk to people who use the beach. Fishermen are encouraged to bury fish remains because they can attract unwanted numbers of gulls to the area.

Nests are sandbagged against storms and high tides. Where necessary eggs are cross-fostered into other nests or removed for hand rearing. A programme of trapping predators around nests is vital to help protect the adults, eggs and chicks. 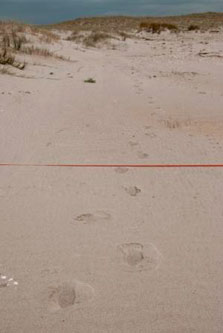 Footprints inside a fenced-off area

Parent with fish, and chick in sand

In 1983 the number of fairy terns at Mangawhai and Papakanui Spit dropped to an alarming all-time low of 3–4 breeding pairs. The Department of Conservation (then the New Zealand Wildlife Service) stepped in and initiated protection. A successful population turnaround resulted. This was probably due to the introduction of wardens and the fencing of nests.

Protection has continued until the present day. The number of pairs rose to 7 in 1993. Since 1997, between 6 and 9 pairs have bred each season until 2005. The numbers for the years following are:

Thankfully, additional funding in recent years has allowed for much greater protection and monitoring.

Full-time wardens offer an efficient response to emergency situations. In recent years a warden has been employed on a full-time basis at each of the breeding sites.

Volunteers play a big part in monitoring and surveillance to assist the wardens.

The Department of Conservation New Zealand Fairy Tern Recovery Plan was approved in 2005. The plan describes steps to promote the recovery of the tern. It also outlines different management options, and a work plan.

The long-term vision of the plan is:

The short-term goals for the next five years are:

Volunteers can help monitor NZ fairy terns by recording activities of the birds and their chicks, any potential threats present, fishing sites and other observations that can help with our protection efforts.

We welcome any comments or suggestions you have about the conservation of the fairy tern. Send them to:

With only around 40 left, the NZ fairy tern is one of NZ's most endangered birds. Find out how DOC and local schoolchildren are trying to protect them.

The fairy tern is New Zealand’s most endangered birds, with only around thirty birds in existence. Auckland Zoo keeps their precious eggs safe from bad weather, predators and disturbance.