The native morepork is known for its haunting, melancholic call. This sound gives it the Māori name 'ruru'.

Often heard in the forest at dusk and throughout the night, the morepork (Ninox novaeseelandiae) is known for its haunting, melancholic call. Its Māori name, ruru, reflects this call.

Morepork are commonly found in forests throughout mainland New Zealand and on offshore islands.

They are less common within the drier open regions of Canterbury and Otago. They are classified as not threatened.

Morepork are speckled brown with yellow eyes set in a dark facial mask. They have a short tail.

The females are bigger than the males. Head to tail they measure around 29 cm and the average weight is about 175 g.

They have acute hearing and are sensitive to light. They can turn their head through 270 degrees. 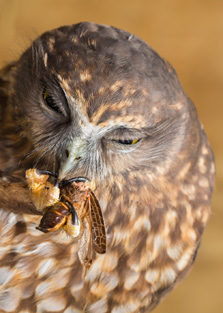 Often heard in the forest at dusk and throughout the night, the morepork is known for its haunting, melancholic call

Morepork are nocturnal, hunting at night for large invertebrates including beetles, weta, moths and spiders. They will also take small birds, rats and mice.

They fly silently as they have soft fringes on the edge of the wing feathers. They catch prey using large sharp talons or beak.

By day they roost in the cavities of trees or in thick vegetation. If they are visible during the day they can get mobbed by other birds and are forced to move.

Predation and loss of habitat

Morepork are still considered to be relatively common but it is likely that numbers are in gradual decline due to predation and loss of habitat.

As the female is a hole-nester she is vulnerable to predators such as stoats and possums during the breeding season and eggs and chicks will also be at risk from rats.

Morepork are possibly threatened from the use of toxins (particularly anti coagulants) used to reduce the numbers of predators. As morepork are at the top of the food chain they could be affected by an accumulative poison by eating live prey that has ingested poison.

DOC is involved in testing methods for measuring the population of morepork so that we can determine if they are increasing or decreasing in areas where pests are being managed.

This involves putting transmitters on a number of birds in the Eglinton Valley and Waitutu to determine survival and mortality. Regular day and night-time monitoring of the transmitted birds will show where the territories are and give an indication of the actual numbers of birds.

A number of call counting methods will be completed over the area to determine what the relationship is between the number of calls and the number of birds. Improved technology and the use of automated recorders will help in this venture and will be tested in the near future.

Meet Whisper. This little local is learning to live with the help of Wingspan in Rotorua. Watch the video to see how you can help our only native owls.