Although similar in appearance to the New Zealand pigeon, the Chatham Island pigeon is about 20% heavier, making it one of the world's heaviest pigeons.

The Chatham Island pigeon or parea (Hemiphaga chathamensis) is one of two species of native pigeon in New Zealand. It is heavier than the New Zealand pigeon, and has a red bill with an orange tip.

Due to the loss of much of Chatham Island's original forest cover, parea are now restricted to the south-west of the island, in the Tuku Nature Reserve and adjacent covenants.

The 1,238 ha Tuku Nature Reserve was donated to the Crown by Manuel and Evelyn Tuanui in 1983. Since its protection the forest has improved, providing more food and habitat for parea. 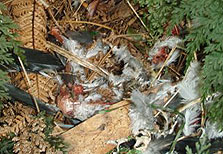 Parea spend much time on the ground grazing on leaves and fruit, making them an easy target for feral cats. Cats, possums and rats can also easily access parea nests which can often be in low vegetation or on the ground.

DOC undertakes cat, rat and possum control within the Tuku Nature Reserve and assists owners of adjacent Conservation Covenants to do the same.

DOC carries out surveys during the breeding season every five years, to help us understand the population size and trend.

A survey found that the population has increased to around 500 birds, from a population low of 40 in the late 1980s.

Landowners have helped protect the habitat of the parea by creating reserves and fencing remnant bush to keep out stock. Predator control has also been carried out.

Sightings of parea outside the south-west Chathams are of interest and should be reported to the Chatham Islands DOC office.

If you are travelling to the Chatham Islands, or transporting goods or livestock there, be careful that you don't introduce pest animals and plants or diseases. These could threaten the flora and fauna in this unique environment.

The kererū is a large bird with irridescent green and bronze feathers on its head and a smart white vest. The noisy beat of its wings is a distinctive sound in our forests.

The parea is one of the largest pigeons in the world. Closely related to the kererū, this species dropped to around fifty birds in the 1980s. Learn how people on the Chathams protect it.