What to expect on Royal Cam

Read a month by month description of what is happening on camera and at the colony at Taiaroa Head.

For more general information about the albatross colony and our work at Taiaroa Head, see our general FAQ page.

Read more detail about what is happening at the colony each month:

Watch the Royal Albatross short film to learn more about these birds and their life cycle.

Female Northern royal albatross lay one egg at a time. There is about a month between the first egg and the last egg to be laid in the colony.

DOC rangers then ‘candle’ each egg to record if it's fertile or infertile. Candling is the process of shining a specialised torch through the egg to check for blood vessels. Blood vessels indicate a fertile egg as these are for the developing embryo.

You can try this at home with a torch and a hen's egg in a dark room. They shouldn’t be fertile if bought for eating, so you won't see blood vessels, but you can see into the egg. 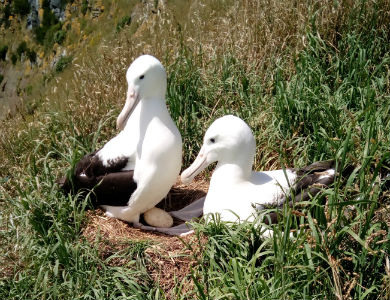 The task of keeping the eggs warm to incubate them is split evenly between both parents. When parents swap for nest duties, you'll see them communicate using specific behaviours. This includes yapping and preening each other. The bird preparing to leave will also pull grass.

After a few changeovers, you'll see the parents start to take longer trips to feed at sea. Once the albatross start taking longer trips, they're usually at sea for 7–14 days but can be longer. But if the mate at sea has not returned in this time, you'll also see DOC rangers work to prevent the loss of the egg.

After 13 days, we replace the egg with a dummy egg. If possible, the real egg will be fostered at another nest. But if no foster nests available, we place them in the incubator. We’ll also consider supplementary feeding the adult on the nest at around 16–18 days.

However, if the missing bird is suspected not to return, we remove the dummy egg to release the remaining partner.

After laying their eggs in November, the parents continue to share incubation duties during January and February. Parents take turns to keep the egg warm from two days to three weeks at a time, spending an average of eight days each in the nest.

Although before the egg is laid and prior to hatching, they will swap sooner. They will continue to do this throughout the entire incubation period of about 11 weeks - one of the longest of any bird.

Once the egg begins to hatch, rangers remove it and incubate it. They then turn the hatched chick to the nest, after which you'll see them regularly weighing the chick and checking its health. 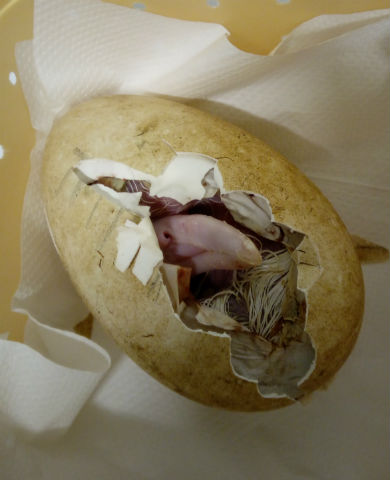 You should see the egg start to hatch around mid to late January, or the start of February. This is the busiest time for DOC rangers, as flies are a major problem at the hatching stage when the weather is hot.

Once an egg starts to hatch, you might see us swap it with a dummy, to move it to our incubator to prevent flystrike. We'll can also use blood cells from the hatched egg to perform a DNA analysis to reveal the gender. The process takes a few weeks.

We place the dummy egg to keep the parents returning to the nest. Once hatched, we return the chick and continue to check them and their health regularly.

Why we incubate hatching eggs

After making a hole or pip in the tough shell, chicks take about three to six days to fully emerge. During this time, flies can lay maggots on the egg or the young chick (‘fly strike’), which can quickly lead to their death. Flies have been one of the biggest causes of chick deaths at Taiaroa Head.

To help prevent this, we spray nests with insect repellent that has been specially formulated to be safe for the birds. We spray pipped eggs when they’re moved to the incubator, and again when the hatched chick returns to the nest.

In the past we used peppermint oil because flies dislike the smell. This helped keep the chick safe during the first few days. But we found flystrike would still occur and so we moved to using our current repellent which is more effective. 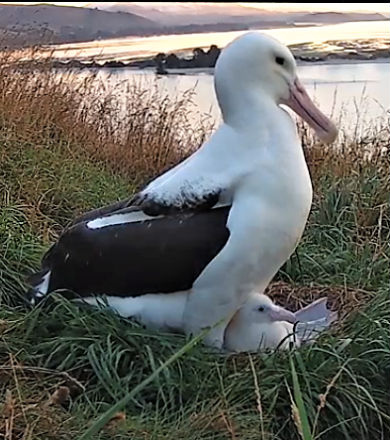 Parents will constantly guard their chicks once they have started hatching until they are 4-6 weeks old. Taking turns to feed or guard the chick during this time.

From around 3 weeks old the chick will be getting too big to fit under the adult and you'll see it staying close to the nest. At this stage it can retain more body heat so doesn't need constant brooding from a parent. The chick can move out of the nest but rarely will until it is a few months of age because if a parent arrives and they cannot find it, it won't be fed.

When first breaking out of the egg, the yolk sac will keep chicks going. Sometimes chicks won't get their first meal until they are two days old. Then they’ll start to be fed regurgitated food by a parent a few times a day. The amount each chick gets given in the first few days or weeks can vary from 10 g to 100 g per meal.

The adults have enough food for several feeds while the chick is a new-born, but as the chick grows food can become scarcer. So, they're generally fed once before the adult heads back to sea.

At six weeks, the chick is much larger and you'll start to see the parents leave the nest unguarded to find food. This is known as the 'post-guard stage'.

By the time the chick is 4-6 weeks old, both parents are on full-time food gathering duties to feed the chick enough. From April, the adults will come to feed the chick and leave within 10 minutes. Seeing them on the cam isn't as easy.

Once parents leave the chick alone for the first time, it may only be for part of the day. As you see the chick left alone more regularly, it can become 2-3 days before next parent and meal arrives. It's normal now for the chick to be by itself overnight. Its stomach can hold enough food to last it several days, then up to a week as it grows.

If a chick goes too long time without a visit from a parent or is underweight, you may see rangers feed it with a well-blended fish smoothie to avoid lumps that could get caught. This is because adult albatross will only feed their own chick at this stage and won't foster another. So, if a chick’s weight is low for its age, DOC rangers will feed it.

You won't see the chick move far from its nest as its legs aren't strong yet. But often you'll see chicks make 'play nests' close to their hatch nest where they may stay for lengthy periods. As it grows, it will wander and perhaps off camera, but never too far.

You might also see curious juvenile birds investigate the chicks. They usually won’t cause any harm but may make the chick anxious, which can cause them to vomit fish oil to protect themselves. It's best this doesn't happen, as the down becomes less waterproof compromising the chick’s health for winter. However, you won't see us shooing them, as we don't want the chick or parents to become fearful of us or the nest while we support them.

As the chick grow to 100 days old, you'll see their sex characteristics. This includes weight, profile and temperament changes.

Males are heavier and larger than females and tend to be more aggressive. We use these changes to predict the sex of the chick, but now use less invasive DNA analysis of blood cells taken from the hatched egg. The process takes a couple of weeks after the last chick has hatched.

The chick will also start to lose its fluffy down from the end of its adult feathers. You'll see the chicks starting to look more grown-up.

July/August: Banding and preparing to fledge

What to expect on Royal Cam in July and August.

You'll see us band the chicks in either July or August, when their legs are near their adult size and there is still plenty of time before they depart. Some chicks are nested closely together and when they move around, we need to identify who’s who!

Chicks get an individually numbered stainless-steel band on their left leg and, some years, a coloured plastic band on their right leg. These bands fit around the leg and is a bit like wearing a loose watch for the bird. The coloured band has two purposes:

You'll see the chicks exercise their wings before they depart. They'll start flapping on ground, or holding their wings out facing the wind. This is their first stage of building up muscle strength in their wings. As the chicks become lighter in preparation to fledge, you'll see some brief practice flights, where they'll hovering above the ground in the colony. This helps them learn how to take off and land.

During this time, the chicks become more active, moving to other parts of the headland to make use of winds from all directions to practice the skills needed for fledging. Sometimes their hovering will turn into more of a practice flight, and the bird will travel many metres. However, their first actual flight will be as they fledge without returning to the headland after.

When a chick is ready to go, the wind direction, camera location and slope of the area will determine if we can capture this moment on Royal Cam. Some chicks walk to the lighthouse nearby to fledge during North-East winds, while others have been seen on Royal Cam.

You'll see albatross chicks fledge during September, when they're around 7.5 months old, an average of 240 days. The oldest few chicks tend to depart before the younger ones, but it isn't all about age. Some chicks are at sites more exposed to favourable take off winds, so you might spot these chicks going to sea before older chicks of the same year. Once they've left, we won't see them return to the colony for 4 - 10 years.

Once the parents realise their chick has gone, they'll spend the following year building up their energy for the next breeding attempt. Albatross breed every two years as it will have taken the two parents all their energy to raise the chick to fledging. This year's parents will not be in condition to breed again during this year. 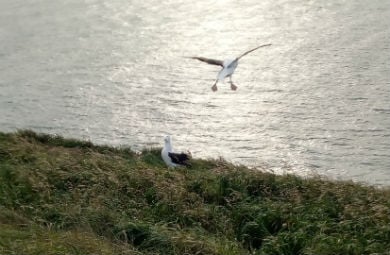 During October, next season's birds arrive home after 12 months at sea, ready to start the new breeding cycle. The younger, first time returners turn up later in the year.

Once they've arrived back, they stay to mate and build their nests. You might see the male defend a territory where the nest will end up. This may be within 40 m of the nest he grew up in.

The birds that have partners will mate and stay until the chick fledges.