Skip to content
DOC rangers seen on Royal Cam are part of the Taiaroa Head Albatross Team. A group of 4 to 5 rangers who work a roster of 7 days all year round.
Image: Ligs Hoffman | DOC

Discover the work DOC rangers do on and off Royal Cam to support royal albatross on Taiaroa Head.

The DOC rangers seen on Royal Cam are part of the Taiaroa Head Albatross Team. We are a group of 4 to 5 rangers who work a roster of 7 days all year round. We check on all albatross, eggs and/or chicks on the headland each day.

To lessen the risks to royal albatross, we:

Rangers also keep records, band birds and maintain the colony grounds. Find out about the work we do during specific periods of royal albatross' life cycle:

Albatross can easily go for 2 weeks without food. However, sitting on a nest for 2 weeks in the summer heat can cause dehydration.

Monitoring has shown that an albatross could desert the egg after 13 days for self-preservation. To mitigate the risk to the egg we remove any egg from a breeder who has been on the nest for 13 days. The egg goes to the incubator for safe keeping and a dummy egg is placed in the nest.

If no changeover has occurred on day 15 the adult on the nest will be hydrated with 600 ml of fluid with vitrate (hydration support).

Video of OGK being hydrated on day 15.

On day 17 or 18 further hydration and supplementary feeding will start and continue till either the mate returns or it is considered that the bird on the nest would be better of being released. At this point the dummy egg would be removed and the bird would leave with there being nothing to incubate.

During hatching rangers work two shifts daily. This ensures rangers are on site during the long daylight hours of summer to protect albatross eggs and chicks.

After chicks make a hole in the tough shell of their egg, flies can lay maggots on the egg or the young chick ('flystrike') which can lead to their death. Staff hatch all the chicks in incubators leaving a dummy egg in the nest. The nest is sprayed with Avian Insect Liquidator (AIL) when the hatching egg is removed and on return of the day old chick who has had AIL applied also. This has significantly reduced fly-strike.

In this ‘Behind the Scenes’ video you can see the hatching chick and why it is so vulnerable to fly-strike. On hot or even only mild days if the parent stands up this exposed hatchling would be a fly magnet.

Albatross nests are spread over about 200 m2 of Taiaroa Head. Rangers have installed two water lines covering the entire colony to help keep the birds at each nest cool.

If we see albatross panting or standing to cool their legs, they may be overheating. So, we target cooling water using a mechanism installed at each individual nest to adjust the waterflow.

Introduced predators such as stoats, ferrets and feral cats are one of the biggest risks to newborn albatross chicks. Rangers work hard to set and maintain traps on and near the headland. Chicks are most at risk when they are 2-6 weeks old, but by the time they are a couple of months old (and around 3-4 kg) they can defend themselves.

Organisations such as the Pukekura Trust, Penguin Place, Nature's Wonders and the Dunedin City Council's Task Force Green also help by trapping in the nearby area. These traps also help with protecting the many other seabirds found on the headland, such as penguins, shags, and shearwaters. 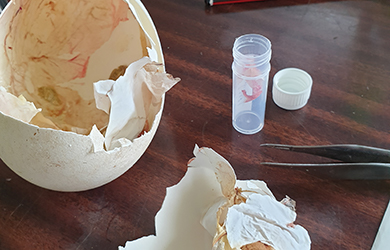 We use blood cells from the hatched egg to perform DNA analysis to know the chick’s sex. This helps us to know if their weight is healthy, as males become heavier than females after a few months.

Once chicks have hatched from the egg, we collect the eggshells so we can take blood cells from them. We then send the shells to the University of Otago’s Zoology Department for analysis. 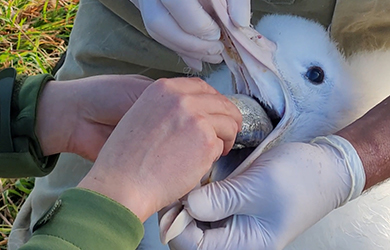 We monitor each chick and their weight every year. We’ll weigh and feed them if they are underweight, and no other albatross can.

Rangers weigh the chicks daily until it reaches 14 days old. After 14 days, we weigh them weekly until they fledge in September. We also monitor when their parents swap egg warming and food gathering duties to track if the chick has a parent with food to give it.

If rangers find the chick is underweight for its age, or if a parent is late in returning from sea, we may feed the chick. Rangers feed very young chicks well-blended fish smoothies, to avoid any lumps that could get caught in their throats. As they grow up the size of the fish can be increased to whole fish.

Foster nests are those where a pair have laid an infertile egg, or an egg has died and the parents are available to raise another pairs' chick. Rangers place dummy eggs here to keep the pair on the headland in case a nest is deserted, or a chick awaiting a parent needs fed.

DOC rangers note when adult albatross come and go from the nest to track when chicks are being fed. Strong or calm winds can make landing difficult for albatross parents returning from sea to feed their chick. Being unable to find food can also prevent albatross parents from returning.

It’s best for an adult albatross to feed a chick. So, when an adult has not returned for around 13 days, we move the egg or chick to a foster nest and try to return the egg or chick if they return. If there are no foster pairs, then DOC rangers will feed the chick until it fledges.

Rangers are experienced at handling albatross and are trained to move carefully around the birds to minimise any negative reactions. Ranger work is aided by the fact that albatross have evolved without land predators and need to be very loyal to the nest if they hope to raise a chick.

Until the chick is at least 6 weeks old, albatross will tolerate rangers, but may not want us there. After 6 weeks, the adult will move away when we are nearby as the chick is in post guard stage and the parent does not need to shelter is.

Our understanding of their behaviour minimises the chance of being bitten. For example, a little tap on the bill replicates the bonding behaviour between a pair. Occasional bites happen, and it can hurt, but we stay relaxed and work to keep the birds calm so we can continue to support them. 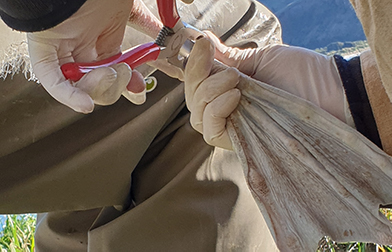 We put bands on albatross chicks when they are 6 months old. Usually we place a stainless-steel band on their right leg with a unique 5 or 6-digit number.

Bands for the season

We place a single colour plastic band with a one or two-digit number on each chick. This number is unique to them and is so we can identify them for our record-keeping that season. It helps us identify them as they move around the colony.

Once the juveniles return from several years at sea, we replace the single plastic band with a two or three colour band combination.

We read the bands from the top down according to the first letter of the colour. For example, O is for orange. The one exception is K for black as B was already in use for blue when we started to use black bands.