Free of introduced predators and pests, Mangere and Rangatira island nature reserves in the Chatham Islands are refuges for rare and endemic species including the critically-endangered black robin.

The Chatham Islands consist of two main islands (Chatham and Pitt), around which are several fascinating smaller islands, islets, rock stacks and reefs. Of these, the two largest are Mangere and Rangatira.

These two Crown-owned islands are designated Nature Reserves and are vital for the conservation of the Chatham Islands flora, fauna and ecosystems. Free of all introduced predators and pests, these are some are the last remaining refuges of Chatham endemic species. To ensure that the predator-free status of these islands is maintained, access to both Mangere and Rangatira is tightly-controlled. Access is by permit only and is generally restricted to those undertaking management activities.

Situated to the West of Pitt Island, Mangere is 113 ha in area, surrounded by cliffs and rises to 286 m at its summit. It was purchased by the Crown in 1966 after having been farmed, which resulted in the widespread clearance of most of the vegetation. The last sheep were removed in 1968 and the island is now completely free of introduced mammalian herbivores and predators.

It is mostly covered in rank grass, a legacy of the farming era, but Mangere is now being actively re-vegetated. Thousands of plants are raised each year, planted out and weeded by hand. There is a patch of remnant akeake forest on the north-east side, home to a small but thriving population of black robins. The cliffs and steep slopes support communities of shrub daisies, prostrate Chatham Islands koromiko, iceplant, Chatham Islands geranium and megaherbs such as giant sowthistle and soft speargrass.

Mangere is now one of only two sites in the world where black robin are found. Chatham Islands snipe and parakeets are common. Forbes' parakeet is far rarer than the red-crowned parakeet, being found only on Mangere and Little Mangere. Sea birds, once totally dominant on the island, declined drastically during the farming era, but are making a comeback. Petrel and shearwater burrows are common in places, and the shore platforms are home to Chatham Island oystercatchers. New Zealand shore plover have recently been translocated from Rangatira.

The privately-owned Little Mangere (Tapuaenuku, right in the photo above) lies just off the south-west end of Mangere (centre left). Little Mangere is a towering volcanic massif, 17ha in area and 214m high. It had become the only home of the Chatham Island black robin when the last seven individuals were transferred to Mangere island in the late 1970s, in a last-ditch attempt to save the species. Little Mangere is still an important site for Forbes' parakeet and Chatham Islands button daisy, and supports an active population of sea birds that burrow among the roots of its forest cap. Further to the south-west are The Castle (Rangiwheau) and Sail Rock (far left) two spectacular rock stacks upon which the ocean swells hurl themselves. Sugar Loaf is another stack, off the east of Mangere.

Rangatira has been described as one of the world's premier bird islands. Like Mangere, it is a Nature Reserve managed by the Department of Conservation. Purchased by the Crown in 1953, it was still being farmed- with up to 1400 Saxon merino sheep - until 1961, when the last sheep were removed. Virtually denuded during the farming period, it has since shown spectacular forest recovery, led by Chatham Islands ribbonwood, mahoe, akeake, flax, pohuehue, matipo and  megaherbs. Gentler than Mangere, it lies off the south-east coast of Pitt Island. It is 219 ha in area, rising to 224 m above the western cliffs.

There is a busy fur seal colony, including a nursery area, at the southern end of Rangatira. The island is home to Chatham Island snipe, tui, tomtit, red-crowned parakeet and oystercatcher. It is the stronghold of the shore plover. Gulls, skuas and terns all nest and roost there.

However, it is for the black robin and the sea birds that the island is famous. It now accommodates the biggest population of the critically-endangered black robin. An intensive programme of cross-fostering and hand-rearing which began on Mangere Island proved so successful that new populations have been  established on  Rangatira Island and Pitt Island's Caravan Bush (the Ellen Elizabeth Preece Conservation Covenant).

The sight and sound of petrels and shearwaters at night on the island is one of the great phenomena of the natural world. There are literally millions of storm petrels, sooty shearwaters and broad-billed prions, offering a glimpse of the Chathams of the past. Chatham petrels breed only on this island, and risk being overcome by the sheer numbers of the other burrowing sea birds. There is an on-going programme to ensure their survival. 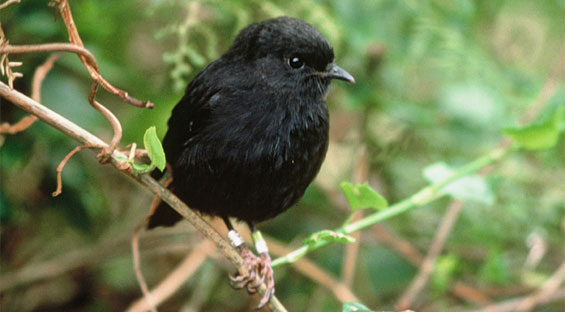