How many rock lobster (crayfish/kōura) are present in Cape Rodney-Okakari Point Marine Reserve and how are their numbers changing? 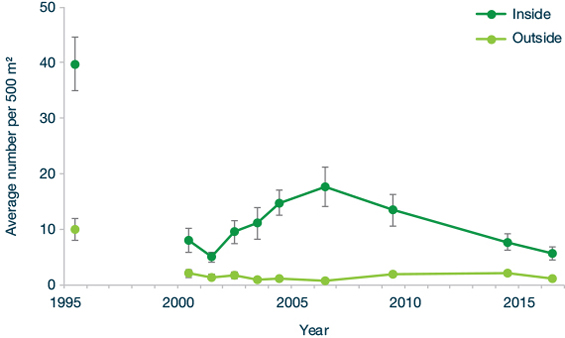 Natural levels of rock lobster in the marine reserve are uncertain, so their status cannot be assessed at this time.

Note: Graphed results show the average number per 500m2 (± standard error) of rock lobster of all sizes, including those smaller than the legal size. No suitable monitoring data is available from before 1995.

There has been a decline in the average number of rock lobster per 500m2 in the last 10 years. The monitoring survey in 2016 recorded one third of the rock lobster recorded in the 2006 survey.

A similar declining trend has been observed at Tāwharanui Marine Reserve in the last 7 years.

DOC has commissioned regular counts of rock lobster in the marine reserve and at nearby non-reserve sites since 2000.

Data analysis to derive the status and trend of snapper at Cape Rodney–Okakari Marine Reserve is underway in 2016. It is not included in this report card.