New Zealand is known for having one of the most unique marine environments on the planet. Learn more about the world we have underwater.

New Zealand is a world hotspot for biodiversity. This is easy to see on land with our iconic species like kiwi, tuatara, and wētā. But the marine environment is no different. We have over 17,000 known species and more are being discovered all the time. Experts estimate up to 85% of New Zealand wildlife could be in the ocean.

Why marine biodiversity is important

Biodiversity is short for ‘biological diversity’. This refers to the variety of wildlife in an area, such as the types of plants and animals found there. The more types of wildlife living together in an area, the more biodiverse it is.

We need to protect biodiversity. This is because each species has its own important role to play in keeping our environment healthy. Each relies on the work of other species for its survival.

More biodiverse environments are better at resisting changes in the environment. This can be storms or rising temperatures. Habitats with a lot of different wildlife types are also likely to sustain more animals and plants.

Our Exclusive Economic Zone (EEZ) is 4.2 million squared kilometres. An EEZ is the sea area over which a nation has special rights to explore and gather resources. It stretches from edge of our coast to 200 nautical miles offshore and includes the wider continental shelf of Zealandia.

New Zealand's EEZ is about 15 times our land mass size, making it the fifth largest in the world. It has about the same known species diversity as the entire European marine area, which is almost six times larger. 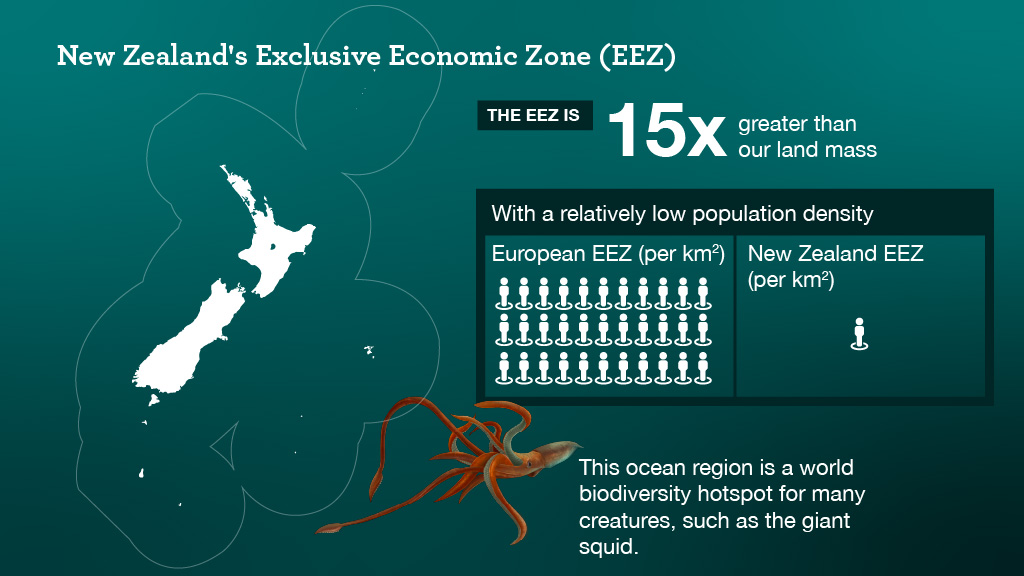 The wildlife of our waters

In a 2008 global study on known marine wildlife found that New Zealand ranked the highest in the world for our proportion of native species. This is because of the isolation of Australia and New Zealand, which separated from other land masses about 83 million years ago.

Over half of our 17,000 reported species are endemic, which means they are only found here. This includes over 6000 known species of invertebrates, and hundreds of seaweeds and fish.

New Zealand also has a huge number of different types of sea sponges. For example, we have carnivorous sponges, which are often only found in much deeper waters. We also have around half of the world’s cetaceans (dolphins and whales). These include Hector's and Māui dolphins. 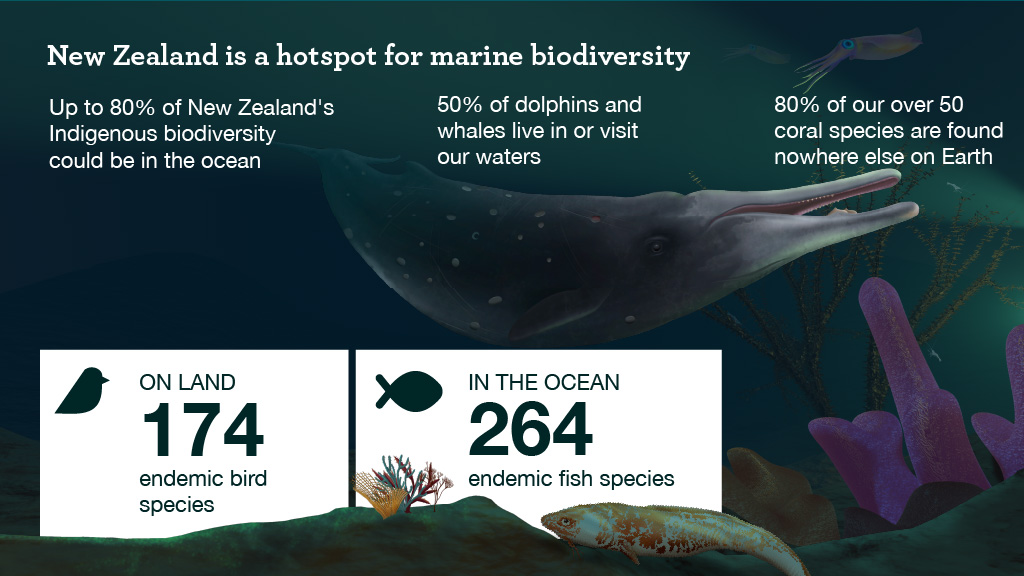 Why we have so many marine species

The temperature range of our waters

One reason New Zealand’s coastal waters are so diverse is because there’s a 6 oC difference in temperature across the country. This means we can have both subtropical Northland and the subantarctic Auckland Islands in the far south.

Different ocean currents flow around the globe. They bring warm tropical waters and cold deep-ocean waters. In our seas, a ‘ribbon’ of tepid water runs below Australia and around our two mainland islands. Meanwhile currents from the subAntarctic brings icy waters. The mixing of these currents creates unique zones which support a large range of life.

A unique feature of New Zealand’s waters is the diversity of habitats. There are over 50 habitat types in our coastal regions alone, each supporting different species. A rocky reef in the north is completely different to one in the south because of the change in temperature.

For example, you can dive in warm, subtropical waters with sea turtles at Poor Knights Islands and a short flight later, see elephant seals in Fiordland.

Seamounts are often areas of high biodiversity. There are over 800 known seamounts in our EEZ. Most of them are found deeper than 1000 m so many have not been researched.

Underwater canyons, such as the Kaikōura Canyon, carry nutrient-rich water up from the deep sea, supporting many kinds of marine life. 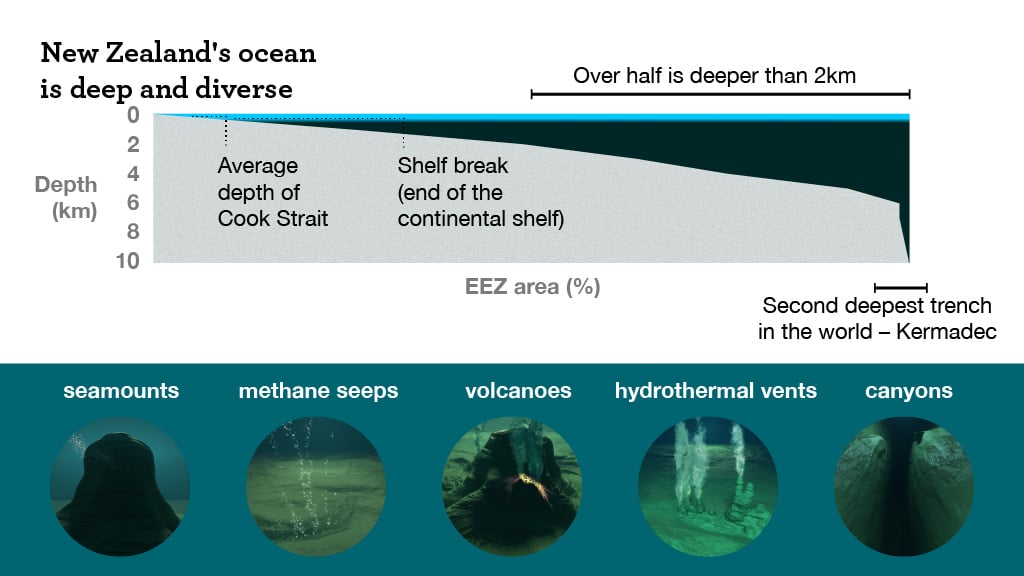 Discovering more in our waters

Most of what we know about our marine environment is in shallow coastal waters, which are easier to access and research. The deep ocean (deeper than 2000 m, and over 10 km deep in places) is more challenging to explore. It’s been estimated that there could be over 50,000 marine species left to be discovered.

We are still discovering new species of all sizes, such as a new species of deep-water giant sunfish (Mola tecta), discovered in 2017. A new species of shallow water Trnskii’s clingfish (dellichyhus trnskii) was also found in 2018. 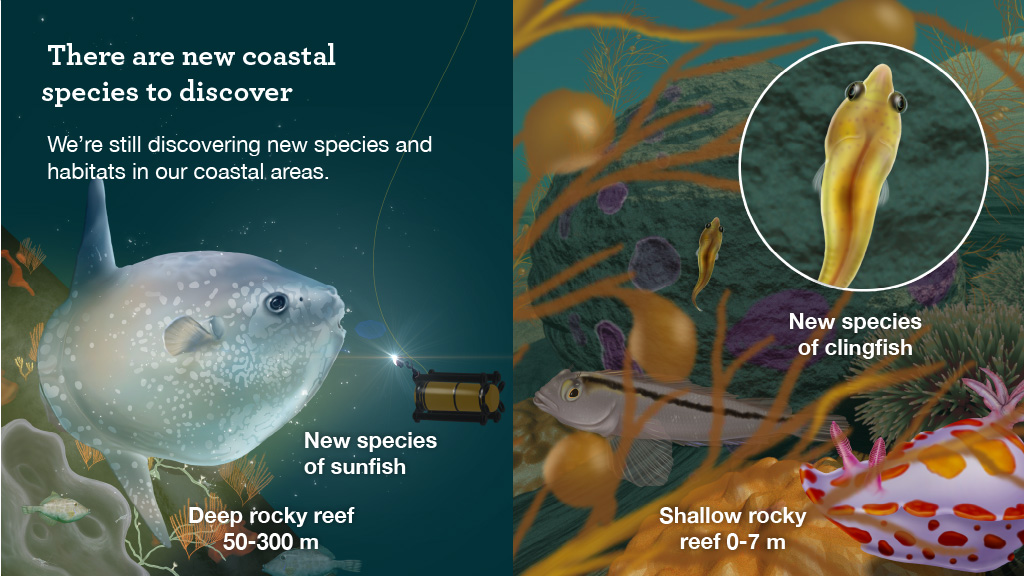 New species are yet to be discovered in our coastal areas | See larger (Jpg, 269K)

New habitats are also being discovered and researched, like the deep rocky reefs found between 50 and 300 m deep.

The deep sea is a hostile environment.  Creatures here must adapt to survive under very high pressure and complete darkness. Despite this, there is an astounding amount of life in the deep sea.

Exploring the deep is a challenge. It can be expensive, time consuming, and requires very special equipment, such as submarines.

Deeper than 1000 metres, the only source of light comes from bioluminescence. This is light produced by living creatures. Most of the food and nutrients here arrive by falling from the water column above, although some organisms can get their energy from deep sea vents and seeps.

Changing Tides | Tai Tōrua is a webinar series to support ocean resilience. The series has been created by World Wildlife Foundation NZ and DOC.