Mohua translocation to the Eglinton Valley

October 2015
A report on the translocation of 80 mohua captured from Anchor Island and released over two days to the Eglinton Valley, Fiordland to supplement the existing population.

In October 2015, 80 mohua were captured from Anchor Island and released over two days to the Eglinton Valley, Fiordland to supplement the existing population. The translocation was made possible by funding from the Mohua Charitable Trust. At least 60 mohua were detected in the valley in early 2016, 24 of these were from this latest translocation.

Mohua were once abundant in the Eglinton Valley; however, due to rat and stoat predation the population dwindled to 18 individuals following two consecutive beech mast seasons in 1999-2001. Rat control was ramped up as a result of these losses, and the current regime is a combination of bait stations covering 4,800 ha to control rats in moderate mast years, and aerial 1080 operations to control rats and stoats over 10,250 ha in higher mast years, and a linear trap line along the valley to control stoats.

A translocation of 69 mohua was made in 2010 from Chalky Island to supplement the relict population in the Eglinton Valley. Monitoring since the translocation indicates a relatively high fledgling survival from 74% to 86%, however there appears to be a substantial decline in the number of adults in the valley, from 55 in 2013/14 to 35 in 2014/15. This could be attributed to emigration, and to boost the population a supplementary translocation was planned.  In October 2015, 80 mohua were translocated to the Eglinton Valley over two days from Anchor Island. 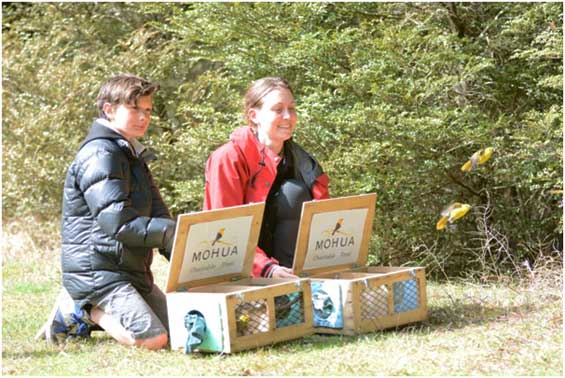 Four teams of two experienced mohua catchers spent two days catching groups of mohua along the tracks on Anchor Island, based aboard the Southern Winds vessel.

Mohua were captured in mist-net rigs using single or double nets. Foxpro speakers were used to call birds into the net. The birds were individually colour banded and kept in purpose built boxes. These boxes are partitioned and one or two birds are kept each side, if space is at a premium there are sometimes three per side. Boxes are equipped with natural perches and mealworms, and are kept in the shade with a readymade cover over them to reduce stress to the birds.All birds caught are released the same day, with at least two hours to forage before dark.

Mohua were released at Kiosk Creek in the Eglinton Valley, via helicopter from Anchor Island. The population was monitored directly after the release, focussing on fledgling success and adult survival. Not all pairs had their nests found and monitored this season, due to lack of staff and time.

This season 60 adult mohua, including 24 from the Anchor Island release, set up territories in the Eglinton Valley. Twenty nine pairs were found, 27 of these are known to have had breeding attempts. Nest success in monitored nests was once again high, with 15 (79%) of 19 found nests fledging young. Nine pairs had nests which were not found but were subsequently seen with fledglings.

There were no losses of adult females on monitored nests.

The majority of the first nest attempts fledged in the two weeks between Christmas and the first week of January. Mohua nest finding and monitoring ceased with the start of the long-tailed bat season on 11 January 2016. The number of found nests this season is therefore not indicative of the total nest attempts for mohua, and re-nest success or lack of it has not been determined for 2015/16.

No new mohua were colour banded in the valley this season.

Spring is often a challenging time to conduct translocations due to the windy wet conditions, however we managed a two day window weather and it coincided when the Southern Winds was available which saved money and meant we could access the island more easily than if dropped off by helicopter. Anchor Island is a good source site for harvesting mohua, there is a surplus of birds and the island has a good infrastructure with two huts and well maintained tracks.

In the Eglinton Valley, there appeared to be a substantial decline in the number of mohua found in the Eglinton Valley from 55 adults and 22 pairs in 2013/14, to 35 adults and 14 pairs in 2014/15. Going into the 2015 winter only 58 mohua (including 23 fledglings) were known of in the valley. Thirty six mohua were seen in the spring of 2015 pre translocation (62% survival), and adult survival over the winter seemed high. 23 of the 27 banded (adult) birds who had been seen in 2014/15 were seen in the 2015/16 season, this is a survival rate of 86%. However, recruitment still seemed very low with only two birds seen who were obviously in their first year, and only one of these was seen as a helper to a breeding pair, the other was obviously travelling through the forest, and was not found in a territory.

This is a minimum number, it is possible other un-banded mohua may have been young birds; however there were not many (11 known) un-banded mohua in the valley (8 un-banded birds had been seen in the 2014/15 season) and if this were true it would still mean that some birds had been lost over winter. It is not clear what has caused these losses, or if the birds are simply travelling outside the study area. There are many vacant, seemingly suitable territories available within the valley and it is unlikely that all juveniles have dispersed out of the monitored area.

Catching and transporting techniques for mohua have become refined after several translocations. We recommend using experienced mohua catchers and banders, and to ensure the birds welfare is paramount. An ample supply of meal worms and decent perches in the transport boxes is recommended, as is keeping only two birds per side. We have put three per side when running low on boxes which is not ideal. This could be remedied by bringing extra transfer boxes.

The population of mohua in the Eglinton Valley needs to be monitored closely to determine dispersal, nesting success and recruitment.

Anchor Island should be used as a source site for mohua translocations in the future, like Chalky Island it has a very healthy population of mohua and can easily sustain annual harvesting. A further translocation of up to 80 mohua should be made to the Eglinton Valley from either of these sites to boost the population further.

Thank you to the Mohua Charitable Trust for sponsoring the mohua translocations to the Eglinton Valley. Thank you to Ngai Tahu, in particular John and Jardin Roberts, for support with the translocations. Thanks to the support of the Kakapo Team, and the staff on the Southern Winds. Special thanks to the expert mohua catchers: Jason van de Wetering, Flo Gaud, Clement Lagrue, Glen Greaves, Erina Loe and Warren Simpson. Thank you to Shinji Kameyama, Michelle Crouchley, Wendy Newton and Lindsay Wilson for release support. Thank you to Monique Van Rensburg for her newly found photography skills.