Walking in June to October

You need special skills and preparation to complete the Tongariro Alpine Crossing in winter (June to October). There are increased risks from snow, ice, avalanche terrain and sub-zero temperatures.

Track surface: Track is covered in snow and very icy in sections.

Suitable for: People with alpine skills, equipment and experience. You must:

Prepare for a long, challenging day

Allow 9 hours to complete the walk. There are between 9 and 11 hours of daylight in winter, so leave early enough to complete the trip before it gets dark. Always take a head torch.

Be prepared to turn back if conditions are no longer safe or if your progress is too slow.

On a calm day, Red Crater is at least 10°C colder than Taupō and 5°C colder than the start of the track – subtract another 2°C for every 10 km/h of wind:

Conditions can change quickly. Layer your clothes to trap warm air in and keep cold wind out. Start with a base layer of polypropylene/merino, add an insulation layer of fleece/wool and finish with a waterproof shell layer.

Expect ice on the track between April and October. A helmet, crampons and ice axe are essential, as is competency using them. 38% of tramping injuries are from slipping.

Avalanches are a hazard. Know the avalanche forecast. Take an avalanche transceiver, avalanche probe and snow shovel, and be competent using them.

Talk with someone at the Tongariro National Park Visitor Centre who knows the current conditions.

Go with a guide

Know your limits. Have a memorable and safe experience with the following approved Tongariro Alpine Crossing guiding companies: 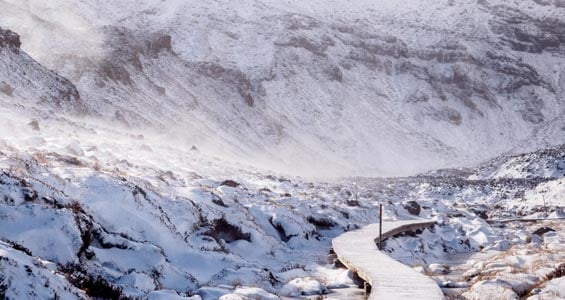 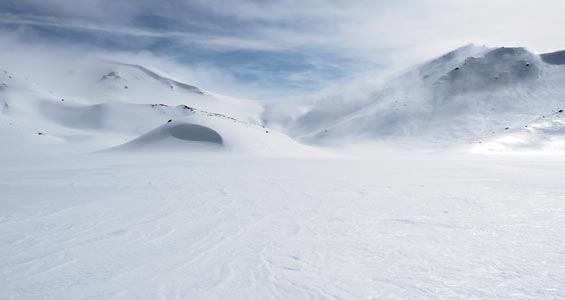 Walking in November to May

Start by 8am to ensure you leave enough daylight hours but pack a headtorch just in case.

This challenging trip begins at 1120 m, climbs the Mangatepopo Valley to the saddle between Mount Tongariro and Mount Ngauruhoe, through South Crater before climbing again to Red Crater, the highest point on the crossing at 1886 m.

You will then descend on a volcanic rock scree track to the vivid Emerald Lakes, known as Nga Rotopounamu (greenstone-hued lakes). After passing Blue Lake, also known as Te Wai-whakaata-o-te-Rangihiroa (Rangihiroa’s mirror), the track sidles around the northern slope of Tongariro, then descends in a zigzag track down to the road end at 760 m.

Be prepared for a long and challenging day out.

The nearest towns are:

Turn back if weather conditions are poor in the valley – conditions will get worse as you go higher up the mountain.

There is very limited parking near the access points to the track. From the beginning of Labour weekend in October to 30 April , parking restrictions will be in place at road-ends. Excellent shuttle services run from all local towns - arrange through the following i-SITEs:

Alpine environment with changeable weather conditions at all times of year. It is common to experience very cold temperatures, strong wind, heavy rainfall and poor visibility in summer – snow can fall at any time of year. Check the Tongariro National Park weather forecast before you go.

Volcanic risk. The Tongariro Alpine Crossing passes through volcanic hazard zones – even when the track is open, volcanic risk is present. Volcanic monitoring systems monitor activity and mitigate volcanic risk, but won't ensure your personal safety. If you are uncomfortable with this risk, choose a different track.

Te Maari, Red Crater and Ngāuruhoe vents have all been active within the last 100 years – the most recent eruption occurred from Te Maari in 2012.

Geothermal hazards. There is geothermal activity around the Tongariro Alpine Crossing – especially near emerald lakes. Steam vents (fumaroles) should not be approached – steam is very hot, the ground can be unstable and severe burns are possible. Stay on the marked track at all times to avoid injury. 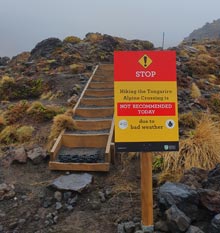 DOC will apply a 'Not Recommended Today' advisory on bad weather days. The advisory will be applied if any of the following parameters are exceeded at 12 pm or 6 pm for the weather forecast at Red Crater:

The assessment to apply the advisory will be made at 6am every day. If applied:

If conditions are poor, try alternatives such as Taranaki Falls Walking Track or Tama Lakes Track.

How to pack for a day walk

This is the perfect habitat for a variety of New Zealand’s native birds. In forested areas, you may see bellbird/korimak, tūī, New Zealand robin/toutouwai, tomtit/miromiro, fantail/pīwakawaka and maybe New Zealand's smallest bird the rifleman/titipounamu. Part of the shuttle fee of about $40 helps DOC with conservation projects.

All waterways including the lakes on Tongariro and his peaks Ngauruhoe and Ruapehu are sacred to local iwi, Ngāti Hikairo ki Tongariro. Kaumātua Te Ngaehe Wanikau asks visitors to the area to respect the sanctity of the maunga tapu (sacred mountains) by not touching or entering any of the waterways including the alpine lakes. Ngāti Hikairo ki Tongariro places extreme importance on their guardian role in protecting Tongariro and his peaks.

Ngatoroirangi, the founding ancestor of Ngāti Tuwharetoa, the local iwi (Māori tribe), ascended the great mountains of the Central Plateau 30 generations ago. It was then that he named Tongariro and the many features of the surrounding landscape, declaring this area as home for his descendants. It is from these beginnings that Ngāti Tuwharetoa maintains its intrinsic responsibility to protect the mountainous area to which they belong.

The generosity and foresight of Ngāti Tuwharetoa saw the heart of the mountainous area made sacrosanct in 1887, with the intent that the Crown would stand alongside Ngāti Tuwharetoa to ensure the continued protection of Tongariro. This led to the establishment of the Tongariro National Park in 1894, a first for New Zealand, and fourth in the world.

In 1993, Tongariro became the first property to be inscribed on the World Heritage List under the revised criteria describing cultural landscapes. The mountains at the heart of the park have cultural and spiritual significance to Ngāti Tuwharetoa and symbolise the spiritual links between this community and its environment. The park has active and extinct volcanoes, a diverse range of ecosystems and some remarkable landscapes.

The continued occupation by Ngāti Tuwharetoa in this environment ensures the cultural, spiritual and environmental values are protected and shared with all those who encounter this dynamic landscape.

Take five minutes and learn how to prepare for a day walk and #MakeItHomeNZ.