New Zealand has the only herds of white-tail deer in the southern hemisphere. 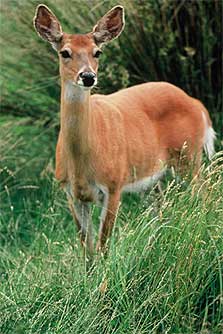 Size: Males stand around 1000 mm at the shoulder and weigh 50 kg plus with females lighter at 40 kg plus.

Antlers: Only male carry antlers, which curve forward with vertical tines and no brow tines. Antlers are cast July to August with new ones hardened by following March.

Reproduction: Females usually give birth to their first calf when two years old. Calves require milk for the first three months and stay with their mother for eight to nine months. The rut occurs late April to end of May, peaking middle May. Bucks do not call during the rut make wallows or round up females in a harem they stay with an individual doe while she is in oestrus. 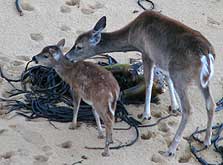 Where to hunt white-tail deer

You can use the hunting block search function to find hunting areas that have white-tail deer.

Search for a hunting block that has white-tail deer.

In New Zealand white-tail deer are established in two areas.

Occurring near Glenorchy at the head of Lake Wakatipu, white-tail deer occupy the lower reaches of the Rees and Dart River Valleys as well as the lower slopes of the Humboldt, Forbes and Richardson Mountains.

Hunting country at Wakatipu is a mixture of private and conservation land and hunting in this area requires a high degree of fitness.

The white-tail deer favour the coastal areas of Stewart Island with inland use highest below 30 m elevation. Habitat is mostly dense lowland mixed podocarp – hardwood forest with few open areas. The areas of open country are mainly on the dune systems of the west coast. The topography is often confusing and hunters should be equipped with map, compass and GPS, and know how to use them.

In New Zealand there is no seasonal restriction to hunting white-tail deer meaning generally they can be hunted throughout the year. There are however instances where restrictions apply for specific reasons and periods when hunting is favoured.

It is important to check for these conditions with the Queenstown Office queenstown@doc.govt.nz.

It is important to check for these conditions with the Stewart Island Office.