Fallow deer were among the first to be successfully introduced to New Zealand. 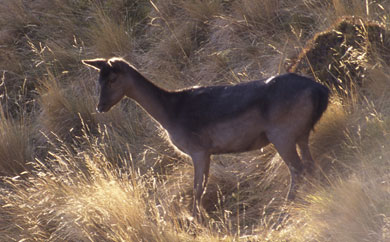 Colour: The most variable of any deer species in New Zealand with four quite distinctive colour phases:

Antlers: Present on males only and cast each year in October or November with replacement antlers developed by February. Typical antlers on older deer (yearlings have unbranched spikes) have a round main beam at the base which becomes flattened and palmated at the top end. On the lower beam are brow and trez tines and the palmation has points on the rear edge pointing backwards.

Social behaviour: Fallow tend to be gregarious and where undisturbed can form quite large groups containing both sexes of all ages. With hunting pressure, the normal sequence is small groupings with separate herds of male and female coming together during the rut period of April-May.

Fallow eat a wide range of plants, including fungi, and favour lowland areas such as river flats and lower valley sides. They live in indigenous or exotic forests and often use adjacent farmland for feeding.

Fallow are quite vocal barking when disturbed, females and young bleating to each other and males groaning repeatedly during the rutting period.

Reproduction: Rut begins in April with males establishing territories, marked by scrapes in the ground into which the male urinates.

Females usually don't breed till 16 months old with young males, less than 4 years old, kept from mating by older males. Females are attracted to the males rather than a male herding them up in a harem like some other deer species. Usually females give birth to a single fawn, twinning is rare.

Where to hunt fallow deer

Fallow deer can be found in both the North and South Islands of New Zealand on public conservation land and private property.

As well as the above areas, fallow deer have become established, through farm escapes or illegal liberations, in various areas and to hunt there you will need private landowner permission.

In New Zealand, there is no seasonal restriction to hunting fallow deer, meaning generally they can be hunted throughout the year. However there are instances where restrictions apply for specific reasons and periods when hunting is favoured.