Explore one of the West Coast's best known ghost towns. Waiuta was once a bustling mining settlement, producing nearly 750,000 ounces of gold from 1.5 million tons of quartz.

Find things to do and places to stay Waiuta area

On 9 November 1905 a prospecting party found the “Birthday Reef” of gold, on King Edward VII’s birthday. They sold their claim to a speculator, P.N. Kingswell for £2,000. Kingswell proved the reef and sold the site to the Consolidated Goldfield Ltd for £30,000.

The first mineshaft was fully operational by 1908. Known as the Blackwater shaft, it reached a depth of 563 m. The mine was extended in 1926 with the acquisition of the adjacent Blackwater North claim, which was renamed the Prohibition. The Prohibition shaft took over in 1938 and reached 879 m deep.

Waiuta township grew along with the mine, and by the 1930s the population had grown to around 600 people. Due to its isolated location, the town became largely self sufficient in terms of facilities, shops and social life. It became well known on the West Coast for its many sports teams and regular balls.

Miners drilled and blasted gold-bearing quartz rock out of the underground reef. The rock was then trucked through tunnels to the shaft where it was winched to the surface for processing.

The mine produced nearly 750,000 ounces of gold from 1.5 million tons of quartz. 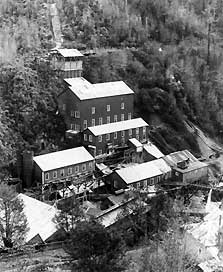 From 1908 to 1937 gold was processed at the Snowy Battery. The gold was pounded out of the rock using the water powered ‘battery’ of iron stamps. The battery was superseded in 1938 by a modern ball mill on Prohibition Hill. Here iron balls in revolving steel drums crushed the quartz rock.

Four separate electric power generating plants provided electricity over the life of the mine, supplying the township as well as the processing plants.

In 1951 the Blackwater shaft collapsed, blocking the ventilation system. As it was uneconomical to repair the shaft, the mine closed leaving the residents unemployed and with no choice but to abandon the town. 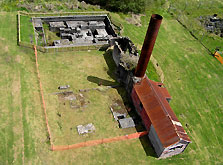 Aerial view of remains at Blackwater Mine

Latham, Darrell (1992). The golden reefs: an account of the great days of quartz-mining at Reefton, Waiuta & the Lyell (Nikau Press).

Waiuta is halfway between Reefton and Greymouth. It is signposted from SH7, 21 km south of Reefton. Turn onto Waiuta Rd, then right onto Blackwater Rd, which becomes Pearce Rd.

Gold was discovered at Waiuta, near Greymouth in 1905 and within a few years a new town had popped up. This video is about how Jimmy Martin discovered gold here over a hundred years ago.