This stamper battery crushed the quartz from Golden Lead, until miners realised their dreams of wealth were also crushed. Visit one of the few stamper batteries in New Zealand still remaining on site.

Stamper batteries like this one were once found at the hundreds of larger quartz mines in New Zealand. Today, as few as twenty still stand on site.

This battery is representative of the many short-lived and long-vanished gold operations once found in the Reefton area. Even at the large Waiuta and Big River mines the batteries no longer exist, so this one demonstrates what was once there. 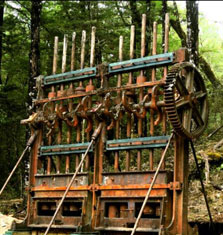 Gold-bearing quartz, mined high up on the hill, was carried in buckets down a 1.3 kilometre aerial cableway to the stamper battery. The battery hammered the quartz into a powder, freeing the specks of gold to be recovered.

Following promising prospects from the mine, the battery was installed in 1891 and crushed just 11,000 tons of ore in 12 years. Like so many gold mines in New Zealand, the venture was unsuccessful and shareholders lost their investment.

Since abandonment in 1903 the large building that housed the stamper has vanished. In around 1980, a pelton wheel and berdan were lifted out by chopper for use at the Blacks Point Museum near Reefton. 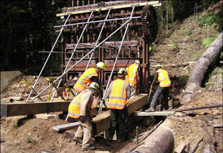 In 2008 DOC undertook a rescue operation to save the battery which was close to collapsing. The heavy timber framework that supported the battery was decaying and had to be completely replaced.

A DOC worker skilled in working with heavy timbers took the technical lead. Before work could start, milling and seasoning such large sized timber was a challenge. Planning and monitoring of safety was paramount for work to proceed beneath the tottering 13 tonne stamper. A crew of 4-7 staff lived on-site, with the work taking just over three weeks in total.

A number of other interesting Golden Lead relics could be stabilised, such as key remnants of the aerial cableway and the water pipe. However given the costs and logistics, the only likely scenario for this to happen is through a voluntary initiative.

The site is located in Victoria Conservation Park, near Reefton and can be accessed from Big River Hut or from the Progress Water Race Track.

From the end of the Progress Water Race Walk, a rough track climbs and descends numerous spurs and crosses two bridges to reach Golden Lead battery. The battery is standing in a small grassy clearing. In fine weather you can walk in the creek bed, avoiding the steeper sections of the track. The track is not suitable for mountain biking and becomes impassable for trampers during and after heavy rain.